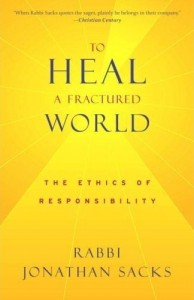 This series is about practical teachings from Jewish and Christian sources for living out the way of love, justice, and goodness. I am particularly interested in texts that correlate to Yeshua’s (Jesus’) teaching for his disciples.

Rabbi Jonathan Sacks (To Heal a Fractured World) says faith is protest. Karl Marx had famously said the opposite: faith is the tool of the oppressors to make the oppressed content with their lot.

Religious faith, Marx believed, was what reconciled people to their condition — their poverty, their disease and death, their ‘station in life’, their subjection to tyrannical rulers, the sheer bleakness of existence for most people most of the time. . . .

Marx’s family background was Jewish: his grandfather had been a rabbi. His relationship to Judaism was, however, hostile, and his description of religion fails as a description of the Hebrew Bible. Judaism is not a religion that reconciles us to the world. It was born as an act of defiance against the great empires of the ancient world, Mesopotamia and Egypt, which did what he accused all religions of doing — sanctifying hierarchy, justifying the rule of the strong over the weak’ glorifying kings and Pharaohs and keeping the masses in their place. In the Bible God removes the chains of slavery from his people; he does not impose them.

Instead of being content with the suffering, loneliness, dejection, and bleakness around us, we are to protest it. We are responsible to act against such things. Especially in little things, we can often oppose the bleakness, inserting some joy and goodness into a bleak world.

This entry was posted in Discipleship, ethics, Love, Loving Deeds. Bookmark the permalink.

3 Responses to Life of Loving Deeds #1