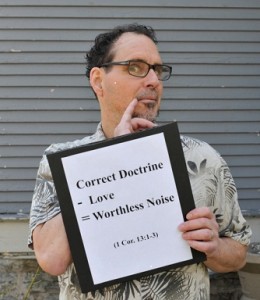 It’s an identity thing. And though the following observations sound basic, when there is confusion, basic affirmations are often needed:
(1) It is not “better” to be Jewish.
(2) It is a good thing to be Irish, Nigerian, Indonesian, and/or Generic American.
(3) It is a bad thing to be confused about who you are and what God wants of you.

There are many thousands of Judeo-Christians in the world (though not as many as some imagine and yet more than others imagine). This is in addition to the hundreds of thousands of philo-Semitic Christians (see Part 1 here for definitions).

And a dozen or more Judeo-Christians wrote me last week to say they have at least some confusion about their identity and appreciate some thoughtful reflection. Obviously, not everyone agrees with me, but I hope to present some sane and relevant discussion about what it means to be a Christian who practices some aspects of Torah and Jewish life. This is important to us Messianic Jews because we are together in community with many Judeo-Christians and also, at times, we find ourselves at odds with various groups of Judeo-Christians. Doubtless I can learn from the people holding up signs on Rachel Held Evans blog for the Restore Unity rally last week (see her Day 7 Roundup here). I really like what one sign said: I hope MY beliefs about OUR religion of Peace, Love, and Joy don’t cause you to hate me.

Remember Why You Got Into This
There are many specific scenarios through which Christians were brought into a Torah lifestyle or a Messianic Jewish congregation or some aspect of the Jewish Roots or Hebraic Roots movements.

One thing most had in common: the realization that Standard Christianity had poor answers to things like why-is-Israel-so-central in the Bible or what-about-the-Sabbath or is-the-law-bad. Yes, what R. Kendall Soulen calls the Standard Canonical Narrative skips right over the people of Israel, the history of Israel, and the relevance of the Jewish people and the Torah.

So, you saw something precious that was lost and you took action. That was and is a good thing. But now that you’re here: it is good to be balanced and clear about what this is all about.

Some Troubling Things
The most troubling thing I see in a small segment of Judeo-Christians is the I-dress-Jewish-but-despise-Judaism crowd. They may have tzitzit (ritual fringes) on. They may wear a yarmulke. They usually light candles on Friday and say Hebrew prayers. But they think things like, “The written Torah is good but the rabbinic traditions are bad.” The use phrases like “Biblical Judaism” or they avoid the word Judaism altogether and simply talk about Torah Observance.

I want to say, “How dare you take on Jewish identity and then look down on Judaism!” Those who fit in this category should note that they have been duped (or that they are duping others). Their lives are filled with a pick and choose Judaism, with traditions they unwittingly follow on the one hand and traditions they castigate on the other. (Hint: All who keep a Jewish life pick and choose, because the tradition is huge, filled with varying opinions, and so on — but the thing is not to be against tradition and then, voila, your hypocrisy disappears).

More common and less troubling, but still a problem, are those well-meaning, non-hypocritical types who are simply confused about their identity. Many were brought in with fallacious arguments like the following:
(1) Since the Sabbath is one of the Ten Commandments, all Christians should be keeping it (note: mainstream Christians are confused about this also).
(2) There is only one people of God and they are Israel; in Messiah we are all grafted in and thus part of Israel.
(3) The mixed multitude that came out with Israel from Egypt is a hint that all non-Jews should be keeping Torah.
(4) There is one law for the native and the stranger and I don’t want to be against God’s one law.

Consequently, it has become important to some Judeo-Christians to virtually erase the identity of Jews by assuming that all who are in Messiah are Israel in some sense.

Clarity of Identity
I hope we can dialogue about this. Many of you who are non-Jews keeping some Torah and Jewish traditions are at least on some level confused by the conflicting voices you hear.

It can be confusing.

But I know a plethora of Judeo-Christians with a very healthy and balanced sense of their identity. They see themselves as followers of a Jewish Messiah who want to be close to the Jewish people and to follow a lifestyle that includes some or all of Torah. And they want to do it in a way that makes it clear they are not trying to be Jewish.

For those who choose to draw near, either at heart or literally by being physically involved, to the Jewish community, being a Judeo-Christian is a beautiful choice. But to those who think God will love them less if they (lawfully as gentiles) eat a pork chop or go shopping on Saturday, I think your quandary is sad. If you want to keep Sabbath and dietary law as a part of your lifestyle and worship, beautiful.

What do you think about the following statements, which I consider to be correct and clear about Jewish and non-Jewish identity?
(1) Grafted in does not mean you are a natural branch.
(2) Being in the commonwealth does not mean you are new people of Israel.
(3) The Torah makes distinctions between requirements for Jews and gentiles and so should we.
(4) Paul’s theology of freedom from Torah for gentiles is a perfect Jewish understanding of Torah (which Christianity misunderstood until the New Perspective on Paul).
(5) The election of Israel was always about all the families on earth being blessed as God’s children through the firstborn, Israel.