Karet or Being “Cut Off” in Torah 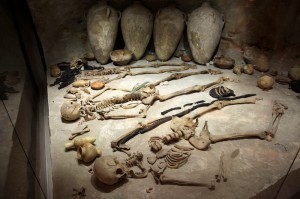 The first reference is Genesis 17:14, “Any uncircumcised male who is not circumcised in the flesh of his foreskin shall be cut off from his people; he has broken my covenant.”

What does it mean to be “cut off” from the people? A technical word for this is extirpation. While we’re throwing around fancy words, another way to talk about being cut off is excision. Excision. Extirpation. Excommunication. What is all this about? What things in Torah bring such a penalty? Is there any hope of forgiveness and release from such a penalty?

Causes of the Karet Penalty
Jacob Milgrom categorizes and lists all the crimes in Torah that result in being cut off. The list is surprising. Offenses range from those which seem relatively minor (eating leaven during Passover week) to major (sacrificing children to Molech).

Here is a simplified breakdown based on Milgrom, Leviticus 1-16, Anchor Bible, 458:

Neither is karet a death penalty for a person’s entire family. That sort of penalty is different. It is called kherem (the ban) and the most famous example is Achan (Joshua 7).

Psalm 109:13 is helpful: “May his posterity be cut off; may his name be blotted out in the second generation!” The phrase “cut off” is from the karet root. Milgrom also cites Ruth 4:10 and the fear that a person’s line of descendants might end up “cut off” through the death of those carrying on the name. Being cut off (karet) can happen naturally through deaths and does not have to be a divine penalty for a crime. Add also Malachi 2:12.

Extirpation, the end of a family line, is the likely meaning of karet. Those who commit crimes worthy of karet will, in a matter of generations, find their line coming to an end.

Yet it also may mean a denial of afterlife. The biblical language of a person being “gathered to his kin” or “ancestors” is arguably more than just a reference to burial (as it is used in some cases of people who were not buried in the family tomb). See Num 20:24; 27:13; 31:2; Gen 15:15; 47:30; Judg 2:10 for some examples of this language in the Bible which probably carries with it notions of afterlife.

As Milgrom points out, karet may very well be both denial of afterlife and a decree from God that a person’s family line will come to an end.

Are Karet Sins Forgivable?
The answer to this should be “obviously.”

There are many examples. One of my favorites is 2 Chronicles 30:17-20. The people have violated one of the stern commands with the penalty of karet. They have eaten the Passover in impurity. They have violated Leviticus 7:20-21 and probably for all of their lives they have violated Numbers 9:13 and Exodus 12:15, 19. Yet here is what we read:

For there were many in the assembly who had not sanctified themselves; therefore the Levites had to kill the passover lamb for every one who was not clean, to make it holy to the Lord. For a multitude of the people, many of them from Ephraim, Manasseh, Issachar, and Zebulun, had not cleansed themselves, yet they ate the passover otherwise than as prescribed. For Hezekiah had prayed for them, saying, “The good Lord pardon every one who sets his heart to seek God, the Lord the God of his fathers, even though not according to the sanctuary’s rules of cleanness.” And the Lord heard Hezekiah, and healed the people.

This entry was posted in Bible, Death, Life to Come, Torah and tagged Karet, Leviticus. Bookmark the permalink.

5 Responses to Karet or Being “Cut Off” in Torah