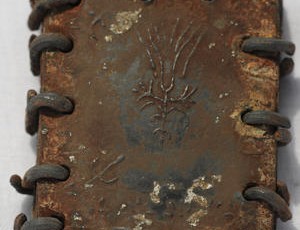 They are not long lost texts that will redefine the meaning of Jesus’ death. They are not a find to rival the Dead Sea Scrolls. There is a chance they may turn out to be something quite significant — but we don’t know what.

I am on an email list in which I get to read the chatter of some excellent scholars, one of whom has been asked to look at some images from the lead codices. They could be from almost any period (even possibly from relatively modern times). They could even be forgeries.

One scholar I read says he has no indication from the first images he looked at that they are forgeries. But the idea that they are from the first century is more than doubtful. Yet another scholar has said he would stake his career that one of the codices, a copper one, is a modern forgery. Read about it here on the Paleo-Judaica Blog.

I have not read all the news reports. I am far from an expert. I just know that people who read Messianic Jewish Musings wonder about this find and what it will mean. The find has not been dated. A good epigrapher has not looked at them. They contain Paleo-Hebrew and Greek letters. They have the symbol of the cross among many others (but the cross so far has not turned up in sources earlier than the 4th century as a symbol of Christ or Christianity). They were not found on a dig, but were looted quite some time ago and have been in private hands for a long time. That fact already lessens their historical worth. Because someone looted them decades ago, archaeologists will never be able to know the historical context in which they were buried.

So, all I am saying is don’t believe any hype you hear. Wait for comments by real researchers when the codices are studied. But I will go out on a limb and say they are definitely not from the first century. The people who have claimed they are from before the New Testament have zero basis for their claim. Were people in the period between Jesus and the New Testament’s writing using the symbol of the cross? Of course not.

This entry was posted in Archaeology, Bible, History. Bookmark the permalink.

4 Responses to The Lead Codices Aren't … They Just Aren't