Sci-Fi, God, the Universe, and Us 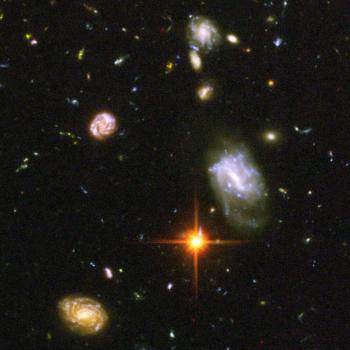 Science fiction was my religion once. Asimov was my prophet and Clark too, and my teacher was Sagan. That was before I came to Jesus and Judaism. Some of the radical amazement I used to feel for the vastness of space came back to me yesterday as I read Heschel’s fourth chapter in God in Search of Man.

He quotes Immanuel Kant. The quote got me thinking about a human being as a speck in the cosmos staring at a nearly unending sea of galaxies, stars, and empty space. I’m sure at some point the insane smallness of a human being next to the stupefying bigness of the universe has made you think too.

It got me thinking, maybe this is why we like science fiction so much. Maybe this is why sci-fi is like fantasy, transporting us to the sublime and opening our minds. Past the jump here a little Kant, a little Heschel, and how it all relates to the meaning of our lives.

Tolkien used to say that faerie stories are subcreation, the natural inclination of our minds to make worlds just like the one who created us.

Lewis used to say that the power of science fiction is exploring the meaning of humanness in a setting that removes the blinders.

Heschel said: The beginning of our happiness lies in the understanding that life without wonder is not worth living. What we lack is not a will to believe but a will to wonder.

More importantly, for this little meditation on the meaning of life, is the portion from Immanuel Kant which Heschel cites in his fourth chapter. I hope you will identify with it like I did:

Two things fill the mind with ever new and increasing admiration and awe, the more often and the more steadily we reflect on them: the starry heavens above and the moral law within . . . The former view of a countless multitude of worlds annihilates, as it were, my importance as an animal creature, which after it has been for a short time provided with vital power, one knows not how, must again give back the matter of which it was formed to the planet it inhabits (a mere speck in the universe). The second, on the contrary, infinitely elevates my worth as an intelligence by my personality, in which the moral law reveals to me a life independent of animality and even of the whole sensible world — at least as far as may be inferred from the destination assigned to my existence by this law, a destination not restricted to conditions and limits of this life, but reaching into the infinite.

And, believing in the power of science fiction and fantasy, I not only read but also have long desired to write. The beginning of my novel-in-progress and some notes about it can be seen here. I won’t be posting the entire novel online, but some parts of it in rough and notes about writing and so on for those who share my interest in sci-fi and fantasy fiction.

Meanwhile, Kant’s powerful mind suggests to us that man as an animal is insignificant. Some prefer to believe that is all we are. But if so, then we are nothing but fertilizer in an impersonal process. But Kant thought it foolish to limit ourselves to this view of who we are. He saw something else within, a moral law which cannot be ignored or rationalized as naturalistic impulse (in spite of the asinine theories being published in neo-atheist books trying to explain love via random, naturalistic development!).

We see the infinite laid out before us and it makes us realize our smallness. We see the moral law within us and we are opened to the infinite beyond us.

6 Responses to Sci-Fi, God, the Universe, and Us