Reasons for Faith in Yeshua 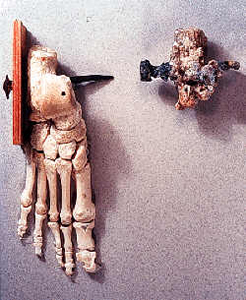 This will likely be the subject of my podcast tomorrow. Of the making of lists there is no end, to paraphrase Qohelet (Ecclesiastes). I am aware of this as I make lists for my YESHUA IN CONTEXT SOURCEBOOK, due out in early 2011. This list was inspired by a friend’s blog in which he said he was straining to think of Jewish reasons for faith in Yeshua. For the most part, I think a dichotomy between Jewish and Christian reasons to believe is unnecessary. But what he means is, if I do not begin with the acceptance of the New Testament and the creeds as authoritative, what are reasons to believe. Many, I would say . . .

1) The foreshadowing of the resurrection.
Resurrection (the bodily raising of the dead at the end of the age) is an idea barely referred to in the Hebrew Bible, but is a staple of classical Jewish faith and sources. Pinchas Lapide’s famous book (The Resurrection of Jesus: A Jewish Perspective) overlooks what occurred to Paul on the road to Damascus. Far more than a resuscitation, the raising of Yeshua signified the dawning of the new age. With Yeshua the age to come had broken through. See N.T. Wright’s The Resurrection of the Son of God for a thorough examination. This is no legend and it is not so easily dismissed.

2) The foreshadowing of the final healing and redemption of the world.
The healing stories in the gospels, read them with fresh eyes, are not about a wonder worker or Galilean Hasid (sorry, Vermes). They carefully depict the foreshadowing of the kingdom’s arrival. Isaiah 35 and 61 are very much in mind (see Matt 11:5).

3) The vindication of Yeshua.
Executed as a messianic pretender, he was vindicated by the resurrection and ascension. Lapide’s theory suffers terribly here. If his theory is true (God raised Yeshua because his death was unjust and he was supremely righteous, but he was not Messiah and he died again later), what was God thinking?

4) Yeshua’s unconventional messianic aims.
No one, wanting Jews and gentiles in ancient Rome to believe in Yeshua, would invent the many problematic sayings and deeds of Yeshua. He was not the typical messiah-figure and he contradicted virtually every idea of popular messianism. Theudas and Judah the Galilean have faded with their conformist notions of messianism, but Yeshua the enigmatic one remains.

5) The reliability of the gospels.
So many have said things like this and have been vulnerable because they assumed claims for the gospels that are impossible to defend. I mean by reliability the soundness of oral tradition, the apparent use of eyewitness testimony as detailed in Richard Bauckham’s Jesus and the Eyewitnesses, and their inclusion of the embarrassing for the Yeshua movement and even for Yeshua himself. The differences and discrepancies which blew apart, apparently, the faith of Bart Ehrman (Jesus, Interrupted), are only a problem for people who accept a simplistic formula (infallibility or falsehood).

6) The complexity of Yeshua’s understanding.
The concept of God, of Wisdom descending from heaven to earth, of the absolute transcendence of the Direct Being of God and the immanence of the Presence in the world, is awfully advanced for a collection of supposed legends by a church seeking to manufacture a savior. Yeshua’s “you must be born from above” way of thinking foreshadows much mysticism to come. That the early Christian movement did not understand what Yeshua was talking about is evident in the controversies of the first few Church Councils. How did early Christianity invent texts it did not understand?

7) The realism of Yeshua’s death.
He was weak. He thirsted. He shouted loudly at the moment of death (and not, as in many poorly thought-out sermons, a shout of victory, but of despair). He spoke of abandonment (embarrassing to his followers afterwards who had to explain this). If the messiahship and resurrection of Yeshua are invented legends, the inventors were extraordinarily sophisticated.

2 Responses to Reasons for Faith in Yeshua