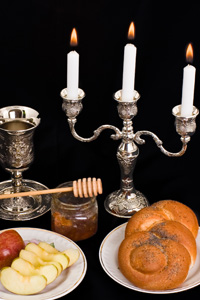 It’s a day of shofar blowing, but the Bible never mentions a shofar. Strictly speaking, the whole association with shofars may be completely post-biblical.

It’s a day of remembrance, but we don’t know of what.

It’s a day of a loud sound, but we don’t know of what.

It’s a joyous day, a festival, but in utter contradiction it’s a day of wailing and preparation for judgment.

It’s a day we can’t decide whether to eat apples and honey, pop streamers, and shout, or to beat our chests in abject introspection.

Rosh Hashanah is a mystery.

To Shofar or Not to Shofar?
How did the tradition of shofar blowing at Rosh Hashanah come about?

(1) It is a ???? ??? mikra kodesh, probably to be translated as “holy proclamation” (not convocation as in many English Bibles, which mistakenly emphasize an assembly).

(3) It is a ??? ????? yom teruah, a day of a loud noise, perhaps a shout. More about this below, since so many translations render this as having something to do with trumpets or shofars.

(4) It has special offerings as do other festivals.

A later passage, the only other reference to this day, Nehemiah 8:1-12, does not mention shofars.

Teruah is associated with metal trumpets, shofars, and shouting (with celebration) in the Bible. The words shofar and teruah are associated in one verse in Torah, Leviticus 25:9, about the Jubilee. They are also associated with shofars in Joshua 6:5 and 25.

So, we do not know what sort of teruah God had in mind for Rosh Hashanah. But it is tradition, not the biblical text, which by the time of the Mishnah (and very likely earlier in the Second Temple period) made Rosh Hashanah and the shofar virtually synonymous.

But in its original legislation, this day could be about a shout of celebration or the sounding of metal trumpets to declare the festival. That is how festivals are usually noted (Num 10:10), though this is a tekiah, not a teruah.

This becomes a question in the Talmud. How do we know teruah for Rosh Hashanah means shofar? The Talmud uses Leviticus 25:9, the teruah on the shofar announcing Jubilee, as its proof text (cf. Machzor Eit Ratzon, p. viii).

Joseph Rosenstein, in Machzor Eit Ratzon, carefully traces the history of the Rosh Hashanah tradition. He notes that in one stage of development, the remembrance was of the covenant between God and Israel. But today it has come to mean something else, God’s remembrance of us for life.

Jewish traditions are complicated. Judaism is not for the feint of mind.

Celebrating Sweetness or Wailing in Repentance?
Do we dip apples and honey and shout with gladness (a sort of Jewish New Year’s party with champagne)? Or do we prepare for the coming judgment of Yom Kippur?

Joseph Rosenstein indicates that the idea of the Days of Awe, that the whole ten days between Rosh Hashanah and Yom Kippur is a time of repentance, is not mentioned in Jewish sources before the 13th century (though the idea of Rosh Hashanah as the day of judgment is in the Mishnah).

So, there is a contradictory spirit to Rosh Hashanah. Some choose to focus on one aspect and some on the other. Some rejoice with apples and honey, having a delightful Rosh Hashanah Seder. Others emphasize the mourning and contrition. A balanced spirituality will probably do both.

A New Year?
Where did this idea come from?

No one can say for sure how it developed. The probable source is custom from the ancient world. And the custom was later given religious justification. The religious justification is from Leviticus 25, in which Jubilee years are proclaimed at Yom Kippur (ten days after Rosh Hashanah). The thought is that the Jubilee year begins at Rosh Hashanah, but is proclaimed only after the period of the ten days.

The classic rabbinic explanation, with some biblical support, is that there are four new years (Mishnah Rosh Hashanah 1:1):

(1) The biblical new year, a new year for festivals and the reigns of kings, the first of Nisan (Abib).

(2) The new year for tithing animals, the first of Elul.

(3) The new year for trees, the first of Shevat.

(4) The new year for years and the year of release, the first of Tishri, or Rosh Hashanah.

The Bottom Line of the Mystery
You either accept the idea of Tradition or you don’t.

There is no point trying to reclaim “the purely biblical Rosh Hashanah.” There is no such thing.

God gave a starter set of instructions and the idea grew and became this beautiful thing. Rosh Hashanah is celebration and contrition, God’s kingship and remembrance of our deeds, a new year and the beginning of ten days of awe, a day of judgment and rejoicing.

God has been in the midst of Israel. His hand is evident, to those of us who practice it, in the tradition as the nation has developed it. God would say, I think, “I gave Rosh Hashanah to my children and they have made something worthy of it; keep the tradition and obey my command.” The tradition is now the way of God, in the very process the Torah sets forth for national observances.

Rosh Hashanah is a mystery, a complex day of mixed themes, worthy of a God beyond knowing, who is a mystery beyond all mysteries and yet who has revealed some of his nature and being. We keep what we know and look with expectant hope for more revelation into the future.

3 Responses to Mysteries of Rosh Hashanah