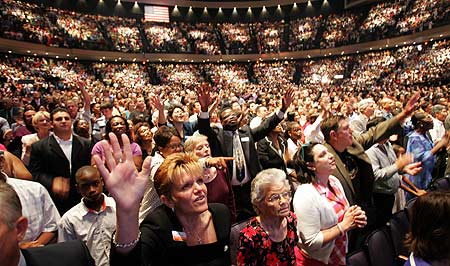 Several recent blog postings by a diverse group of bloggers has me interested in the topic of a richer Christianity, a richer Judaism, and a richer Messianic Judaism. All three kinds of readers come here, Jews and Christians and Messianic Jews looking for spirituality, signs of the Presence, a life abiding in God.

For some time now movements of renewal have been going on in Christianity and in Judaism. I am no expert on all of the movements and if I start naming them, I would certainly leave out some and mischaracterize others.

In general, people have been looking for connection to God and people, seeing religion in its proper sense as being about the elevation of our souls to God and the renewing of the world by our love and action for justice and healing.

Evangelical Christianity had come to low point (and much of it has not risen). Evangelical churches sought to be free from all ritual (a quest which can never completely succeed, because we all have ritual). Evangelical messages sought to be strictly about the individual and God, with religion being merely about salvation and giving money to sustain the church. Mission work was largely about getting foreigners saved and giving to the church as well. One of the few areas of activism was in politics and that did not make evangelicals popular with the general population.

I saw on Bill Kinnon’s blog a video from North Point Community Church, supposedly a satire of evangelical mega-church culture. But as Kinnon says, it is not satire if the people promoting the video have no higher principles and actually plan to do nothing to change the situation. Watch it here and you will thank me for the laughter — a hilarous self-expose by a mega-church, sad only because they embrace and continue practicing what they make fun of: http://www.kinnon.tv/2010/05/sure-its-funny-to-some-but.html

Meanwhile Scot McKnight is discussing post-evangelical alternatives and the passing of the old evangelical consensus. The Evangelical Consensus was the idea that, by getting rid of all rituals and as many theological and practical differences as possible, evangelical Christians could be unified. The result was a Christianity with almost no theology. “Get saved and give to the church” was about the extent of theology.

McKnight says that three streams have appeared as post-evangelical options:

(1) The Neo-Reformed movement, headed by John Piper, bringing back Luther and Calvin, bringing back theology, and unfortunately, moving in the direction of determinism. There is much good here, but what a shame that determinism (Calvinism) is the theology unifying so many people. Other leaders include Mark Driscoll and Al Mohler. Southern Baptists have a huge contingent who have moved in this direction and Calvinism is growing large in the SBC. This Neo-Reformed movement is probably the strongest and most unified of the post-evangelical options. For the record, I like a lot of what this stream offers. I don’t like the unfounded dogmatism and critical spirit toward others and I really don’t like determinism (can you tell?), being a big believer in free will.

(2) The Emergent/Emerging movement, which has lost a lot of steam. Many are disenchanted with Brian McLaren, who asked a lot of great questions in A New Kind of Christian and then gave disappointing, weak answers in A New Kind of Christianity (thanks to commenter Matt Edwards at the iMonk blog for that insight). Some traits of Emergent include: a devotion to the life and example of Jesus, transforming the secular realm instead of retreating to religious culture, community, helping outcasts and the needy, and taking responsibility to leave the world a better place in the name of Jesus. This movement lost a lot of its initial steam, but is still strong and relatively disjointed. People sense something good here, but leaders have disappointed and there is not a strong unifying tradition.

(3) The Ancient-Future worship movement founded by Robert Webber. Many churches are bringing back ancient Christian liturgy. Worship theology has at last progressed far beyond the evangelical rock concert. I know less about this stream, but I don’t think there is a strong unifying center here. It is, rather, a loose revival of worship at the level of local churches (I am sure there are national conferences, though and seminaries who train leaders in this theology of worship).

There are a number of lesser alternatives for post-evangelical Christians. The spiritual formation movement headed by Richard Foster and Dallas Willard, the ideas of people like George Barna and John Eldredge, the movement of mega-church pragmatism epitomized by the Q conference and Catalyst, the Willow Creek movement, and more (I am giving examples drawn from Scot McKnight’s articles, which I will post below).

What I see here are evangelical Christians ready for more, disappointed with centuries of shallow theology, political posturing, and empty practice devoid of meaningful ritual to connect people with God.

People are looking for a richer Christianity.

That makes me ask, “What things make for a richer Messianic Judaism?” More to come.