J-BOM stands for “Jewish Book of the Month.” We are a loose (very loose) movement of people reading a Jewish book every month. The summer has been Jewish fiction time. We finished As a Driven Leaf and The Promise.

Now, August is upon us and we are reading the sad, yet powerfully attractive The Last of the Just by Andre Schwarz-Bart.

September’s selection will be Yom Kippur: Its Significance, Laws, and Prayers which is available on www.artscroll.com. I will recommend a few sections of the book, which isn’t long in any case, and so you won’t need to read the whole thing (though you certainly may).
………………………………… 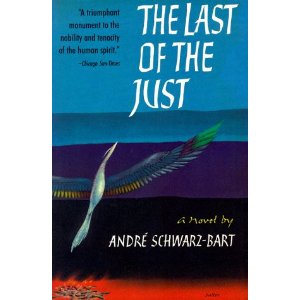 The Last of the Just grips you from the beginning with its woeful tale that pulls you into the reality of life under the sun and promises to expose you in some degree to the mystery that haunts you.

It is a Jewish thing to be sad but hopeful. A synagogue member was visiting and asked, “Is this one going to be as said as The Promise?” Sorry. It will be sadder. The theme is Jewish suffering through the centuries. The protagonist is a Jew in Europe during WWII. And reflecting realistically on tragedy and sadness is an earmark of Jewish identity.

We have the saddest holidays of any people on earth. It seems a short time between Holocaust Remembrance (Yom haShoah) and Tisha B’Av, the commemoration of tragedies and temple destructions in our history. And we have Yom Kippur, such a mournful holy day.

Not only did we just finish reading Lamentations at Tisha B’Av (and I was in a class reading midrash on Lamentations, even more poignant), but even on happy holidays we tend to read sad stuff. At Sukkot (Tabernacles) we will engage in the optimism-shattering wisdom of the too-wise-for-his-own-good Qohelet (the teacher in Ecclesiastes).

The Last of the Just begins already with strangely beautiful sadness. The first story is of a medieval persecution in one European town by the church. Several families take refuge in a tower and the Christians surround it in a siege of sorts. It ends quickly with the rabbi offering his blessing and a quick death to all the men, women, and children inside, so that they will not be taken prisoner and tortured (as well as forced to convert) by the church leaders.

Schwarz-Bart tells of the legend of the Lamed-Vov (I call them Lamed-Vovniks), the thirty six righteous sufferers amongst the Jewish people in every generation (it is a legend, not something biblical). He says:

But if just one of them were lacking, the sufferings of mankind would poison even the souls of the newborn, and humanity would suffocate in a single cry. For the Lamed-Vov are the hearts of the world multiplied, and into them, as into one receptacle, pour all our griefs. . . . So from time to time the Creator, blessed be his Name, sets forward the clock of the Last Judgment by one minute.

The Lamed-Vovniks hold back world judgment. On their account God forestalls the end. Righteous sufferers contribute to the redemption of the world.

Yes, that idea is similar to the image of one Lamed-Vov type, Yeshua (Jesus) the righteous crucified.

The Last of the Just begins with a summary going back nearly a thousand years of the progression of the Lamed-Vovniks through history before it will settle on the story of one Lamed-Vovnik, Ernie Levy, descendant of a tragic rabbi, Yom Tov Levy, the very rabbi who tearfully blessed and then took the life of the kneeling men, women, and children in the tower, having to do the lonely deed on himself last. The power of his suffering came before God and the stigma of the Lamed-Vov came upon his descendants forever.

Melville once called Ecclesiastes a fine-hammered steel of woe. J-BOM readers, or anyone sensible enough to dwell, for a short while at least, in the house of mourning, will find in The Last of the Just an ironic solace in their sadness.