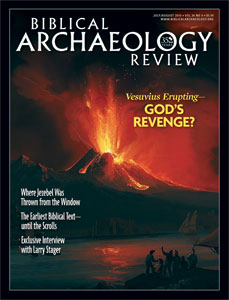 There is an interesting op-ed piece in the July/August issue of Biblical Archaeology Review, a magazine that has been very worthwhile to follow in recent years. Some believers in the history and theology of the Bible will find BAR troubling. Others will be able to eat the fruit and spit out the rind, as it were.

The battle between faith, reason, and revelation constantly plays itself out on the pages of BAR in drama after drama in archaeology and biblical studies.

In this issue, Berkeley professor of Hebrew Bible and Jewish Studies Ronald Hendel explains why he has left the Society of Biblical Literature (or SBL). SBL used to have joint meetings with AAR (American Association of Religion) and ASOR (American Schools of Oriental Research) until “petty disputes among the leaders of these groups” led to dissolving links.

SBL, meanwhile, needed to increase attendance and funding for meetings now diminished by the absence of AAR and ASOR. So what did they do? According to Hendel, SBL did two things:

(1) Change its mission statement in 2004 to remove the phrase “critical investigation” in preference for the broader language of mission to “foster biblical scholarship.”

(2) To invite evangelical and fundamentalist groups to SBL, so that now such groups as the Society of Pentecostal Studies and the Adventist Society for Religious Studies are part of annual SBL meetings.

Hendel’s Idea of Faith and Reason
Hendel extols the virtues of Blaise Pascal’s separation of faith and reason. Faith is about the heart according to Pascal, and the “heart has its reasons, which reason does not know.” Faith is intuition, a leap of the emotions and will to conclusions not demonstrable by wisdom.

The other exemplar of Hendel’s ideal balance of faith and reason is the much more disturbing Baruch Spinoza, who first wrote that Moses could not have written the Torah (Pentateuch), disowned the biblical image of God, and chose instead a pantheistic idea of God and reality.

Faith and reason must be kept separate. The Bible can be critically investigated, found to be historically unreliable in the extreme, and yet faith is possible even in the God discussed in the Bible.

I wrote recently in “Faith and Reason, Part 1,” that some of the confusion about faith and reason comes in not distinguishing between two things:

(1) Reasons or evidence for belief on the one hand and

(2) The actual reasons we believe, on the other.

That is, we don’t actually believe because of some fictitious, neutral, objective investigation of the revelatory documents (the Bible, for instance) which leads us inevitably to belief and also to a certain theology of that belief.

But Hendel is upset that SBL is no longer restricted to a certain type of biblical inquiry. He sees it as a loss of professional status. SBL is now open to what we would have to assume Hendel considers non-professionals, people who have no business being part of the dialogue amongst “professional” Bible scholars.

These scholars who allegedly do not belong include all who mix faith with reason. That is not only evangelical and fundamentalist Christians, but also feminists, eco-theologians, and some postmoderns (one would have to assume also some Orthodox Jews would not be welcomed by Hendel).

Should Faith and Reason Mix?
Hendel has let his membership in SBL lapse. He wishes to avoid conflict. At last year’s SBL, he says, the Adventist group invited some Jewish scholars and then handed them material intended to persuade them to convert to Christianity (or Adventist Christianity).

I have to say that believing that faith and reason to some extent belong together is a separate matter from the ethics of proselytizing at professional conferences. Few of the many people who fail to separate faith and reason like Baruch Spinoza would also have blatant disregard for our fellows and harass them with evangelistic literature, especially at SBL meetings.

But the larger question Hendel raises is whether the only professional or serious biblical research is done by people who maintain a strict separation between faith and reason. Here are a few thoughts:

(1) While I have not read any of Hendel’s scholarship, I must say I am more than just dubious that his research is objective or neutral in any sense greater than that of a fellow in the Society of Pentecostal Studies.

(2) Hendel too, like the hypothetical fellow in the Society of Pentecostal Studies, is part of a small group of idealogues with a group consensus on certain points.

(3) I have read some of Spinoza (notoriously difficult and I claim no special insight into Spinoza) and his claim to follow pure reason is pure fiction. It is more accurate to say that Spinoza rejected and replaced the faith of Judaism in his day with faith in certain other philosophical notions (pantheism). Spinoza was an individual and an independent thinker compared to his fellow Jews at the time, but he was no more neutral, objective, or right about the nature of the universe than anyone else (or we should all become pantheists).

The truth is we are all in the same boat. We are all partially blind to truth, the meaning of it all. Our limited perspectives make us all equally able and at the same time unable to determine truth.

Some choose to follow partial evidence down a certain path and to put faith in this path. Others are holding out for greater certainty (which they will never achieve).

If we are all lost in the forest and some of us choose to follow what appear to us to be signs and sounds of the way home and others prefer to keep walking aimlessly until the signs and sounds are more clear, who can criticize those of us who follow partial evidence?

That is, the idea that God has appeared in history, that the Bible gives the best history of God’s intervention in this world, is an idea able to be defended but not proved.

And if some of us mix faith with reason, believing we are whole persons and unable to dissect ourselves as Hendel imagines we can, who can say we are wrong? We would say Hendel only imagines he is able to make the separation and only imagines that critical investigation is purely possible.

Meanwhile, isn’t the discussion richer, not poorer, if people beyond the limits of skeptical scholars come to the table and discuss? I admit that certain viewpoints don’t interest me (including Pentecostal and Adventist viewpoints). But neither would I want to limit myself to the same subset Hendel prefers (scholars who doubt the Bible entirely and choose some sort of faith based on a leap of intuition).

The heart (faith) does have reasons reason knows not of. But we can be critical realists, evaluating the story of our existence and choosing to believe the story is real while always questioning our perception of the story. That is the path I prefer.

11 Responses to Faith, Reason, and SBL