Our book of the month selection (J-BOM) this month is As a Driven Leaf by Milton Steinberg. It is a page-turner and not a difficult book (as some of the others have been). The story is from the pages of the Mishnah and Talmud, about one of the Tannaim (TANN- uh – eem), or the generation of sages up till 200 CE. There are very few novelizations of stories from the Talmud, so it is a rare treat. I’m told it is also a phenom amongst younger Jews.

In July we will get a summer vacation in the Catskills with Chaim Potok’s The Promise. It too is an easy read and very pleasant.

Then in August we have a short, powerful selection (but I won’t kid you, one that takes more effort to understand) in Andre Schwarz-Bart’s The Last of the Just.

People have sent me a number of ideas for September on a high holidays theme. I am looking into a slim volume that I have here on teshuvah (repentance). I know we will get more readers if we have something short and accessible and I’d like to have wide involvement in September.

Never weary in studying and immersing yourself in Torah and Jewish life and history. J-BOM is an incentive for you to read with others, join a movement of MJ’s growing in education, and to find out what richness Jewish life offers. If you can’t read all the books, try for six a year or at least three.
…………………………………………………. 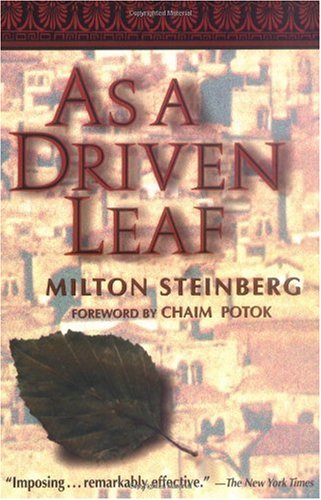 Elisha ben Abuyah was a heretic, an apostate. Usually his name is not even referred to in Mishnah and Talmud. He is usually simple called Acher or the Other.

What does it mean that Elisha was an apostate? Did he become an atheist? The story of his loss of faith sounds like a journey into atheism. But people have speculated in other directions. Perhaps the two leading theories are that Elisha ben Abuya became a Sadducee or a Messianic Jew. Yes, that’s right, one possibility is that he became a Messianic Jew. The Sadducees were a dying group in his time as the Temple had been destroyed and the locus of their power was gone (but some scholars have suggested that they continued on for some time). As for Messianic Jews of that era (or as many would call them, even when they were Jewish, Christians), this was a growing movement at the time.

Louis Ginzberg wrote in the Jewish Enclyclopedia (and I found it on wikipedia):

it is almost impossible to derive from rabbinical sources a clear picture of his personality, and modern historians have differed greatly in their estimate of him. According to Gr