J-BOM is the Jewish Book of the Month club. It’s about MJ’s reading great Jewish books and having, as much as online life can provide, a communal experience of reading.

If you can’t read all twelve books a year that we do on J-BOM, by all means pick and choose.

The June selection will be As a Driven Leaf by Milton Steinberg.

The July selection will be Chaim Potok’s The Promise.

The August selection will be The Last of the Just by Andre Schwarz-Bart.

For September, please send your suggestions. We’d like to do S.Y. Agnon, Days of Awe, but it is out of print and only available in limited quantity online (unless someone knows it is available elsewhere).
………………………………………. 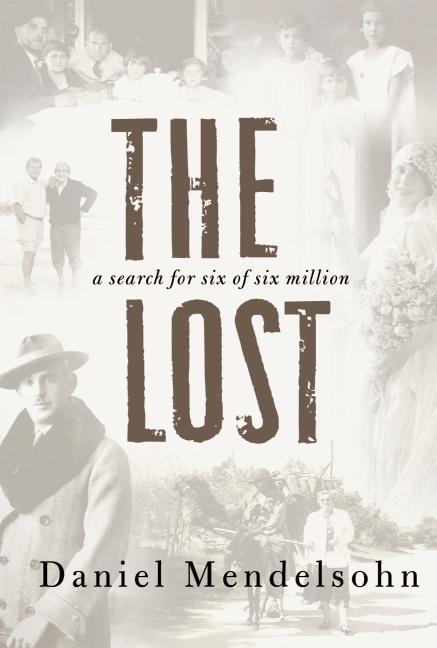 We all need large doses of beauty to make life livable, even sometimes that sad, elegiac beauty that plaintively calls us to embrace suffering, to name it and believe it exists somewhere far worse than anything we have ever known.

Daniel Mendelsohn, along with his siblings, bickering the whole way, went back to Poland, to the town his mother’s family came from, the town whose Jews were erased by the Nazis. The Lost is about finding Bolechow, a journey to origins, to understanding, a window to the stories and experiences of a lost people.

I’m still on the journey, my own journey of reading, reading which is a way for all of us to think about our Bolechow, our own origins (and perhaps our destination too). Journeying through Mendelsohn is also trodding the pages of Torah, from a modernist and merely literary interest, as Mendelsohn the classical scholar weaves episodes of Torah with his own story. As a classical scholar, Mendelsohn’s interest in Torah is academic, literary.

Still, he assumes there will be a connection between the pages of Torah and his own family’s story. He finds many such connections in his spiraling narrative, telling the story of his investigation, of his discoveries, in a circling fashion, with each story cycling many times around personalities, places, and events that punctuate the main storyline. It is the way Homer tells stories, Mendelsohn says to us. Some may find it distracting to read this way, but the best storytellers often use this technique. It has the virtue of immersing the reader in another world at a slower pace, a pace fitting for a narrative of tragedy and betrayal.

The tragedies in The Lost are not all from the Holocaust. There is the story of the woman who died at 36, worn out from giving birth to ten children (three sets of twins and four others) and for her sacrifice, only one of the ten survived past childhood. Such was the squalor of an immigrant’s life in early twentieth-century America.

Some of the tragedies happened much later than the Holocaust. There is the survivor, from a town in Poland called Striy. Now elderly at the time Mendelsohn tells the story, this survivor has become a collector, his home a museum to the lost town of Striy. He wrote to the German government and demanded that they put up a monument in the Holobutow forest where a Nazi aktion meant 1,000 Stryjer Jews shot over an open grave. The German government wrote back and said they would match any funds raised by the Stryjer survivors for the monument. The elderly survivor wrote back angrily: All the other members of the Stryjer Jewish community are IN the Holobutow forest!

And there is a story of betrayal. As far as I am along on this peregrination to Bolechow I have yet to come to the full story. I just know that some of Mendelsohn’s family members were betrayed by someone they trusted. Was the betrayer a Ukrainian, the people who Mendelsohn compares to Cain, who lived and befriended Jews in Bolechow until the Nazis came and then who turned on their neighbor Jews like a story in Genesis 4? Is the betrayer going to be Jewish, someone the Nazis recruited with threats to family?

And there are stories of inexplicable survival, one is taken and one is left. The elderly Ms. Begley, who was strangely equipped to survive the Holocaust by the accident of her blond hair and blue eyes, the only one in her family, and her fluent German. She was “able to pass.” But her story, though one of a survivor, leaves us as despondent as most of the other accounts. For it was just as the young Ms. Begley, in 1940’s occupied Poland had managed to use the subterfuge of her German looks and accent to secure a passage for elderly family members out of the country that tragedy struck. As she was walking back to her village to give the good news to her beloved elderly relations, she saw them on top of the heap in a wagon of corpses. They were among those shot in a Nazi aktion that very day.

Don’t read The Lost if you don’t want to be affected, if you’d rather the long arm of death and affliction stay far away from you. But if a sad melody gives you a sense of the meaning of life and death, as it does for me, then listen to this sad song. As the voice of Abel’s blood (plural in Hebrew, a puzzle of no little consequence in the Torah and in Rashi’s reading of it) cried out from the ground, so these stories tell the truth that must be heard if we are to be keepers of our brothers and sisters as God insists.