Judaism as Competition for Christianity 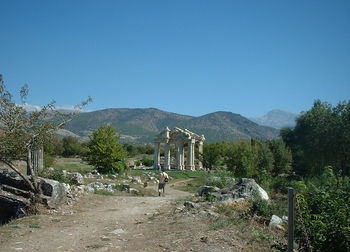 In the May/June 2010 issue of Biblical Archaeology Today, Angelos Chaniotis of Princeton writes about “Godfearers in the City of Love.”

The reference is to recent research at Aphrodisias in Turkey, not too far east of ancient Ephesus. The city was named for the Greek goddess of love and featured a prominent temple to her. It was a also a city with a Jewish quarter. As in many other places in antiquity, a diaspora community of Jews coexisted with pagans and thrived.

The thrust of the article is that previous studies were mistaken about the date of a major find. A marble pillar nine feet high contains inscriptions about donors who paid for a synagogue to be built. The list of 120 donors includes Jews, converts, and Godfearers.

Godfearers (theosebeis) were non-Jews who sympathized with Judaism, renounced idols, worshipped the One God, participated as sort of associate members of the synagogue, who sometimes took on part or all of the Torah.

This marble pillar was originally undated by the first researchers, but they decided to put an educated guess in their notes, that perhaps the pillar was erected around 200 C.E.

Subsequent studies and writings on Aphrodisias took this tentative date as gospel and it was thought that the pillar reflected life at the turn of the third century.

Chaniotis presents evidence that the pillar was actually constructed in the post-Constantine era, to somewhere in the range of 350-550 C.E.

The significance of this later date is simple: if the pillar was erected after the Constantinian shift in religion and Roman politics, then this list of Jews, converts, and Godfearers exists in the context of relations between Jews, Hellenists, and Romans during the time of Imperial Christianity — a very different context from that of the earlier suggested date, 200 C.E.

And if the later date is correct, then it confirms once again that Judaism was competition for Christianity even when Imperial Christianity was well-established. Much evidence of this type is also documented in Oskar Skarsaune’s Jewish Believers in Jesus (Peabody: Hendrickson, 2007).

If the early Christian fathers, like John Chrysostom and Ephraim the Syrian, never tired of warning their Christian flock not to attend the synagogue, it is because many Christians did. Some of the men listed on the donors’ inscription at Aphrodisias may in fact be members of Christian families.

Our era is not the first in which the Jewish context of faith in Jesus drew many non-Jews to the synagogue. It happened before. And the church at that time was thoroughly anti-Judaic, unable to grasp the continuing election of Israel as God’s chosen people.

After the fifth or sixth century, the tide of Christians in synagogues was dissipated.

Thankfully, many voices are calling for better Jewish-Christian relations today, not least MJTI (Messianic Jewish Theological Institute, mjti.com) where Messianic Jews find a voice in the dialogue through the writing and relational work of Mark Kinzer and David Rudolph.

The Jewish and Christian worlds need to face these issues, erase harmful boundaries, affirm commonalities, and get beyond prejudices to find real appreciation. And here we are in the middle, we Messianic Jews, a people who daily exist on both sides of the supposed boundary.

1 Response to Judaism as Competition for Christianity