There is a river whose streams make glad the city of God, the holy habitation of the Most High.
–Psalm 46:5 (4 in Chr Bibles). 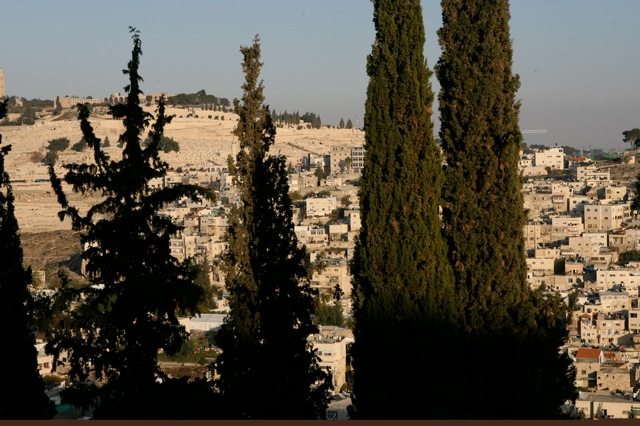 Yeshua went to the Temple as an adolescent to remain close to his father’s house, he said (Luke 2:49). He said the altar at the Temple was holy and made all that touched it holy (Matt 23:129).

We should conclude that Yeshua believed the Presence was there, in a different way, but there nonetheless.

Is the Presence still in Jerusalem? Many have thought so. In the middle 1800’s, a rabbi from Kishniev, Russia went to Palestine with a New Testament in hand. He read it in the land and found the one he called Brother Yeshua was more than merely a brother.

Another acquaintance of mine went hiking and hitchhiking in the 1990’s in Israel. He came to the conclusion that Yeshua is real and is really the king.

How many Jews enter Jerusalem in apathy and leave convinced that the Presence is real? How many Christians think going to Israel will be about learning some places and facts and come home with a new fire, alight with the idea of the Presence returning soon and in our days in tangible form?

In this week’s portion, we read that priest’s portion of grain offerings and sin offerings is holy to the touch. As it says in Leviticus 6:11 and 20 (18 and 27 in Chr Bibles), “anything that touches these shall be holy.” Sanctity is contagious. It can be contained in inconspicuous vessels. If it can be in unleavened cakes and boiled meat then it is not hard to believe it can be in Jerusalem limestone, in synagogues of the Land, in assemblies and groups gathered to study and pray, and in the very air.

When I am in Galilee, I feel as if I am entering the courtyard. In modern Jerusalem, I am approaching the inner courts. In the Old City, I have entered as close as the altar. At the Wall, in the Tunnel, and on the Mount, I am in the Holy Place.

Is it just imagination, sanctified emotion? Or is the Presence really here?

You can miss it. The Presence is not forceful or loud. Or you can experience it. Unlike the many places where we live and pray and read scripture, here the Living One is all around in a different way.

………………………..
January 2-14, 2011, I am bringing a group to Israel. We’ll hike in Galilee and Golan. We’ll spend Shabbat in the desert, overnight in a Bedouin-style tent. We’ll pursue in every place the context of Yeshua’s life and message on the very rocks where he lived out his life and message.

To get more information and become part of the group, go here to my Israel Tour Blog.

3 Responses to Is Jerusalem Holy?