The Lost History of Christianity:
The Thousand-Year Golden Age of the Church in the Middle East, Africa, and Asia — and How It Died
by Philip Jenkins, 2008, HarperOne. 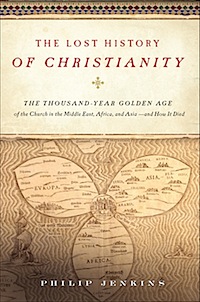 This book could easily have been several things it is not: an academic treatise, an intemperate diatribe against Islamic violence, or an uncritical glamorization of Nestorian and Jacobite Christianity.

In the able hands of Philip Jenkins, The Lost History of Christianity becomes a balanced reading of the loss of a treasure of knowledge and culture the world is too ignorant about to mourn. While meeting all the standards of academic rigor, the book manages to avoid tedious prose. While firmly recognizing and decrying Islamic violence, Jenkin’s account recognizes both the culpability of non-Islamic violence and the reality in which religion becomes an excuse for violence seeking power. While lamenting the lost treasures of knowledge that would be afforded us had Middle Eastern Christianity survived, Jenkins is honest about the differences in doctrine in the Eastern churches.

The Lost History of Christianity is filled with little-known and infinitely intriguing facts:

-The world’s view of Christianity is tainted with a Western veneer that does not accurately reflect its historical genesis.

-While the Holy Roman Empire wallowed in ignorance and violence, the Middle Eastern Church was intimately familiar with classical literature and pursued peaceful relations with Islam and Buddhism.

-Great minds such as Timothy, Patriarch of the East in 780 C.E., have been all but lost to the destruction of Middle Eastern Christianity.

-Great works, including Syriac versions of classical literature which do not exist today and manuscripts of the Bible and other early Christian literature, were all in the possession of these churches which died an early death.

-These Eastern churches possessed scrolls found in Jericho — perhaps some of the Dead Sea Scrolls now lost to us.

-The Eastern Churches mounted a monument in the East explaining the good news in Buddhist style to reach out peacefully to them (rather than the oppositional approach of later churches).

-The great surviving Patriarchate of the Middle Eastern Assyrian Christians is now in Chicago!

-The Eastern canon gives the lie to the claim that Christendom suppressed the apocryphal gospels for political reasons.