Book Review: Up, Up, and Oy Vey 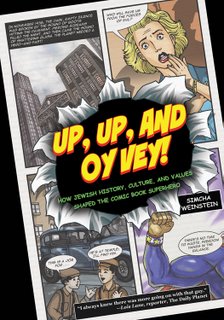 Up, Up, and Oy Vey by Simcha Weinstein is both theological and fun, and how often does that happen?

You might not think a book about the Jewish cultural connection to the comic book world could be theological, but think again. Didn’t you notice theological themes in Superman and Batman, for instance? Weinstein could possibly open your eyes to a depth you never expected to find in comic books.

The subtitle is How Jewish History, Culture, and Values Shaped the Comic Book Superhero. The opening paragraph is an ironic reflection on the Clark Kent existence of many Jews:

For most of my life, I lived a Clark Kent existence: that of a Jew living in Machester, England, intent on blending into the modern, secular world. I kept my Hebrew name a closely guarded secret. My desire to assimilate required no less.

Weinstein describes the Jewish immigrant experience in America in the 1930’s. Jewish memory of the patriarchs and matriarchs of the Bible, which Weinstein calls the first superheroes, led to imaginative escapes from the difficulties of the time. Weinstein’s analysis revealed a texture to comic book history I had been unaware of:

As Eastern European Jewish Immigrants poured into New York’s Lower East Side in the 1900’s, they too viewed the stories of the Bible through the prism of their hard lives in a sometimes baffling new land and passed them on to their children. And those children in turn retold those Jewish tales using dots of colored ink on pulp paper, beginning in the 1930’s. (Actually, Superman was first drawn on cheap brown wrapping paper, but more on that later.) In those days the shadow of persecution was descending upon European Jews once more, and no one seemed willing to come to their rescue. The world needed heroes.

Weinstein explains the personalities behind the comic book industry, including a host of Jewish names such as:
–Jerry Siegel and Joe Shuster, creators of Superman.
–Bob Kane (born Kahn) and Bill Finger, creators of Batman.
–Jerry Robinson, creator of the Joker.
–Stan Lee (born Stanley Martin Lieber), creator of Spiderman, the Incredible Hulk, the Fantastic Four, and the X-Men.

Later chapters explore the mythos and Jewish connection of these various comic lines, with a chapter for each. The final chapter is called “Spiritual Metaphors in Spandex.”

Weinstein has written an easy and fun book that just might get us all reading comic books again, and feeling spiritual about it. Oy vey and read away.

This entry was posted in Book Reviews, Messianic Jewish, Theology. Bookmark the permalink.

2 Responses to Book Review: Up, Up, and Oy Vey