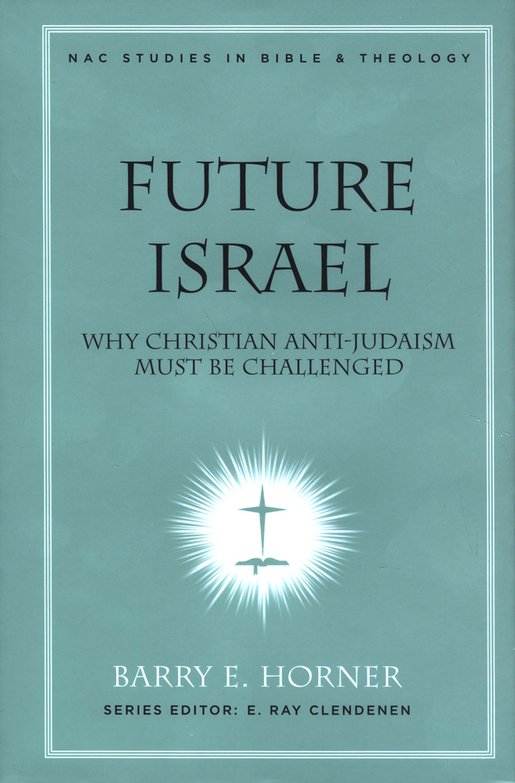 A few weeks ago I promised I would blog about a recently released book that is a 10 on the Richter scale I (as far as I am concerned), Barry Horner’s Future Israel. I hope that Christian pastors take this book very seriously–and there is every indication that they should. It is a supplement to the New American Commentary series, a conservative evangelical series. It is one of only a few supplements to that series, suggesting the editors of the New American Commentary felt Israel was a crucial issue in biblical interpretation. I know . . . you’re saying, duh. Well, for Christian pastors to admit that the place of Israel in God’s continuing plan, present and future, is a crux of biblical interpretation is pretty rare and amazing.

As I discuss Horner’s book, all will not be roses and butterflies. There will be differences. I will suggest that Horner did not go far enough (he doesn’t see that Israel has a continuing duty to keep the covenant from Sinai, i.e. the Torah). Nonetheless, I think this is a book you should buy for yourself and for those local pastor friends you have whom you know need to see the light and realize that Israel is on every page of the Bible!
……………………………………………..

In the “Personal Introduction” to Future Israel, Horner speaks from his heart. As a reader who loves Israel, I had a strong emotional reaction to this chapter. When you care deeply about something and you find that people you love (Christian pastors) often fail to share your passion, it gets you in the kishkes when you find a pastor/scholar who gets it. I get that sense from Horner’s “Personal Introduction.”

Horner describes his pilgrimage into Calvinistic/Sovereign Grace/Reformed Christianity. I do not share Horner’s enthusiasm for this little corner of the doctrinal world. This is the brand of Christianity that makes little of free will and much of determinism. I won’t start a debate here about such matters, but my big point is simple: while I may not agree with Horner’s theological scheme regarding salvation, free will, and determinism, it is great for the message of his book that this is his theological camp.

What I mean is this: Reformed theologians tend to be the most anti-Judaic. Yet here we have a Reformed theologian arguing against supersessionism (also spelled supercessionism, a.k.a. replacement theology, the idea that Christians displace Israelites as God’s people).

In fact, and this is important, it was Horner’s love for and study of the Israelite prophets that prevented him from descending into the usual Reformed views of final things. He had to admit that he greatly preferred the old commentary of David Baron (a Hebrew Christian from the early 1900’s) to the commentaries of his peers on the prophets. He recognizes that his Reformed colleagues were straining biblical interpretation to avoid seeing Israel in the text. In Horner’s own words:

Then a close study of Romans over several years, and particularly chaps. 9-11, resulted in an indelible impression that for Paul, the converted Hebrew rabbi, Israel has an ongoing national identity, its unbelief notwithstanding. On the other hand, it seemed as if Reformed exegesis, at least on a prima facie reading of the text, was attempting to avoid the obvious. (p. xv).

Attempting to avoid the obvious . . . music to my ears.

Of course I am giving Horner a pass on calling Paul a “converted” Hebrew rabbi. I suppose I shouldn’t expect better lingo from a Reformed theologian, but what did Paul convert from and what did he convert to? Wasn’t Jesus a continuation of, not a divergence from, Paul’s Judaism? Oh well, I am so pleased with Horner’s insight, I hate to even bring it up.

Horner goes on to quote various individual whose writings would garner respect among the Reformed/Calivinistic/Sovereign Grace camps of theology. He quotes Horatius Bonar as saying, “The prophecies concerning Israel are the key to all the rest.” Amen.

Then Horner goes on to do us a great service. He refers specifically to writers and thinkers who believe that Israel “is covenantally and eternally persona non grata in the sight of God.” This is something he will do throughout his book.

Horner beautifully points out that Reformed attitudes toward Israel are not without consequences:

Furthermore, with regard to Israel we are not dealing with a doctrinal emphasis that has little relationship with significant Christian ethics. Quite the contrary, as our study will unquestionably prove, the wrong perception of Israel and the Jews by Christians, biblically speaking, has produced consequences of horrific proportions during the history of the Christian church in all its strands.

These are strong words from a man who backs up everything he says with documentation and sounds argument.

Horner’s inability to take his own thought and biblical interpretation to its logical end shows up near the end of the chapter. Horner betrays his belief that Jesus opposed Rabbinic and Talmudic accretions to the Torah of Moses. Horner’s un-nuanced statement shows a bit of a gap in his understanding of Judaism (namely that Torah cannot be followed without the leaders of Israel, vis a vis the rabbis, making rulings that add to the written law, since the written law is deliberately full of gaps).

Still, I find myself overwhelmed with positive emotion as I finish Horner’s “Personal Introduction.” I cannot wait to finish the book.

When a scholar and exegete of the stature of C.E.B. Cranfield so movingly and publicly repents of his former belief that the church has replaced Israel, then none ought to exclude themselves from hearing a call to seriously review this matter and the vital issues that are involved.

What did C.E.B. Cranfield say? Here are two citations that Horner supplies and I think they are a great way to sum up this review:

And I confess with shame to having also myself used in print on more than one occasion this language of the replacement of Israel by the Church. –Cranfield, Epistle to the Romans (ICC) p. 448, note 2.

It is only where the church persists in refusing to learn this message [of Romans 9-11], where it secretly–perhaps unconsciously–believes that its own existence is based on human achievement, and so fails to understand God’s mercy to itself, that it is unable to believe in God’s mercy for still unbelieving Israel, and so entertains the ugly and unscriptural notion that God has cast off his people Israel and simply replaced it by the Christian Church. These three chapters emphatically forbid us to speak of the Church as having once for all taken the place of the Jewish people. –Cranfield, Epistle to the Romans (ICC) p. 448.