Davvening with Thirteen Dwarves and a Hobbit

Posted on December 16, 2012 by Stuart Dauermann

I recently had the great pleasure of seeing the new Hobbit movie, accompanying my daughter and also my wife, who spent a considerable part of her youth rambling about in Middle Earth. The movie was, of course, fantastic. Peter Jackson is a wizard, no less so than Gandalf, and the visual aspects of the film alone are bewitching.

There is a scene early in the film where the young Hobbit, Bilbo Baggins, first meets thirteen dwarves, led by their king, Thorin Oakenshield, son of Thráin, son of Thrór, King Under the Mountain.  These dwarves are leaders of a refugee community, living in exile from their home from which they had been driven by the dragon Smaug. 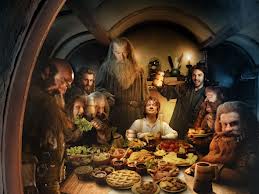 In this scene, having eaten a sumptuous meal courtesy of Bilbo’s reluctant hospitality, the dwarves are gathered around their king, in sober contemplation, as he leads them in a dirge about their longed for home, and how they were driven from it. It is an iconic, penetrating scene.  And as I watched it, I realized it is a perfect representation of a major aspect of what davvening, group liturgical prayer, is for Jews.

When Jews gather to pray, we too sing of our history, of departed glories, of communal tragedies, of supernatural intervention, and of a longing for a home and glorious condition from which we know ourselves to be exiled. This practice is no odious duty, but expresses our recognition of and participation in a trans-generational communal drama which goes back to the roots of our people, and forward to the prophesied glorious consummation.

See the movie, and if you are Jewish, get reacquainted or more deeply acquainted, or even for the first time acquainted with Jewish liturgical prayer.  The story, the tragedies, the glories to come are our legacy. And as was true for Bilbo, Thorin, and their group, there are fearsome battles and dangers to be faced. This is no passive waiting, but rather battling toward a consummation that is sure, yet hangs in the balance.

This tension between suffering and glory, recurring over and over again in Scripture is perhaps best expressed in this verse from the Psalms:  “Many are the afflictions of the righteous, but the Lord delivers him out of them all” (Psalm 34:19), and by this word from the Risen Messiah speaking to a couple of clueless disciples after the resurrection, “Was it not necessary that the Messiah should suffer these things and enter into his glory?” (Lk 24:26).

Sufferings first, glories later, but meanwhile, communal struggle and remembrance in song: davvening with dwarves, and sometimes with giants.