Sympathy for Esau and The Arab/Israel Conflict

Posted on November 19, 2012 by Stuart Dauermann

With all the rhetoric flying about the Arabs and Israeli Jews these days, it is easy, perhaps guaranteed, that we will lose our perspective in one direction or another. Some view the Arabs as entirely at fault, others view Israel to be entirely at fault. Proponents on each side have narratives which both generate and justify their positions on the matter. Such outlooks are always flawed and biased to one degree or another because of our human natures, both personal and social. We tend to justify positions already taken and discount those previously rejected. Thus we become more and more entrenched in positions that are as much reactionary as anything else.

The Torah reading this past Shabbat brings to mind a factor which I would like to throw into the mix. I do so as a committed Zionist. Nevertheless, in keeping with hints in Scripture, I want to speak today about sympathy for Esau. The Arabs of today are not descended from him, but they seem to find themselves in an analogous position.  I think there is something to learn here.

Although Scripture records Esau’s/Edom’s later descendants becoming implacable enemies of the Jewish people (before they were eventually absorbed into the Jewish people, in fact. as Idumeans), we do well to look at the formative events of Esau’s psyche. He was the first-born twin, who came out of the birth canal before his brother Jacob, who was grasping Esau’s heel as he came out. This became something of a family story, as such births are apt to be, and here from the get-go, we find him being on the short end of what might regarded as the ambitious energies of his brother. 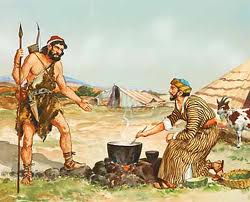 This ambition becomes apparent later when, one day after a hard day of hunting, Esau comes in out of the field famished. His brother is preparing a pot of red lentil stew. Esau is appetite-driven, and, smelling the stew, asks that Jacob give him “some of that red stuff.” Jacob, aware and proactive like his mother Rebekkah, bargains, saying. “First, give me your birthright in exchange for the stew.”  Esau foolishly comments, “Look. I’d dying from hunger here!  What do I need a birthright for? I need that stew!  So here, the birthright is yours, but give me the stew.” The transaction is completed, but Esau will spend the rest of his days regretting it.

Jacob is the more contemplative of the two, and his mother’s favorite, while Esau grows up as his father’s favorite, which the text attributes not simply to Esau’s status as the first-born but also to Isaac’s attachment to the venison he ate, which had been brought to the table by Esau, his outdoorsy, huntsman son.  Isaac his father is an old man, and his wife, Rebekkah seems the more energetic and savvy of the two. As the old man nears his death, she contrives with Jacob to usurp the patriarchal blessing that the old man will be giving from bed as his days are winding to an end. Posing as Esau, Jacob brings his father some meat such as he loves, and the old man, quite blind, is fooled into thinking that it is Esau who stands before him. So he gives to this son before him a huge blessing, wealth and superiority of position and honor over his brother.

When Esau finds out about this, he is devastated and what follows is a poignant scene:

As soon as Esau heard the words of his father, he cried out with an exceedingly great and bitter cry and said to his father, “Bless me, even me also, O my father!” 35 But he said, “Your brother came deceitfully, and he has taken away your blessing.” 36 Esau said, “Is he not rightly named Jacob? For he has cheated me these two times. He took away my birthright, and behold, now he has taken away my blessing.” Then he said, “Have you not reserved a blessing for me?” 37 Isaac answered and said to Esau, “Behold, I have made him lord over you, and all his brothers I have given to him for servants, and with grain and wine I have sustained him. What then can I do for you, my son?” 38 Esau said to his father, “Have you but one blessing, my father? Bless me, even me also, O my father.” And Esau lifted up his voice and wept.

39 Then Isaac his father answered and said to him:

40 By your sword you shall live,

and you shall serve your brother;

but when you grow restless

you shall break his yoke from your neck.”

41 Now Esau hated Jacob because of the blessing with which his father had blessed him, and Esau said to himself, “The days of mourning for my father are approaching; then I will kill my brother Jacob.”

We can see that this is at best a consolation prize. All he can expect is that some day he will get out from under his brother’s thumb.  Not much to hope for, and quite a blow to Esau’s honor. But it is too easy to blame Jacob for all of this, as do Isaac and Esau. Remember that Rebekkah had been told by God when the twins were still in her womb, “The elder shall serve the younger” (Gen 25:23).  In her plans with Jacob to get the patriarchal blessing, she and he were following the will of God as she knew it. And let’s remember too that Esau may just be reaping here what his carelessness has sown: it was he who discarded his birthright at a time when he was hungry after a fruitless day of hunting, at a time when he said in effect. “What need to I have of a birthright? I’m famished!”  His foolishness caught up with him, and as the Book of Proverbs will later remind us, “When a man’s folly brings his way to ruin, his heart rages against the LORD” (19:3),  or in this case, against his brother.

But we need to reserve some sympathy for Esau. His brother was Mom’s favorite, and whereas Jacob seemingly can do nothing wrong, Esau can do nothing right. First he marries Canaanite women, which greatly displeases his mother especially. Then, after he sees her sending Jacob off to Paddan Aram to instead marry a relative, he goes and marries women who are daughters of his uncle Ishmael, but again, these are not quite what Rebekkah had in mind, and again, for Esau, it is “Close, but no cigar.”

While today’s Arabs are not descendants of Esau, still Arabs today feel skunked by the descendants of Jacob. They feel themselves to be unfavored in some way, craving the blessing that seems to have fallen upon Jacob’s side of the family. They feel their honor to be besmirched, and many are murderous in intent.

I do not anticipate a solution to the Arab/Israeli conflict. I feel it is two primal to be resolved by diplomacy, no matter how skilled. But any attempt to bring peace, even temporary peace between the warring parties ought to keep in mind how the Arabs feel perennially one down to the Jewish people, who in their view, have stolen what rightly belongs to others.