The West Bank: Why Some Are So Hot and Bothered

Recently I have been in dialogue with friends both from the Right and from the Left about all kinds of subjects pertaining to the upcoming Presidential Election.  It has been impassioned, informative, intelligent and I for one have certainly learned a thing or two . . . or more.

A couple of days ago our discussion turned to Israel, and one very intelligent participant (they are ALL very intelligent, by the way) discussed what she viewed to be Israel’s intransigence concerning the West Bank, which Israelis term “Judea and Samaria.”  Since this dovetails with my recent blogging, I thought I would address that issue today: What is the West Bank and why do many Israelis, especially from the Right, feel so strongly about it?

Wikipedia tell us that the West Bank is

a landlocked geographical area, located in Western Asia. To the west, north, and south, the West Bank shares borders with the state of Israel. To the east, across the Jordan River, lies the Hashemite Kingdom of Jordan. The West Bank also contains a significant coastline along the western bank of the Dead Sea. 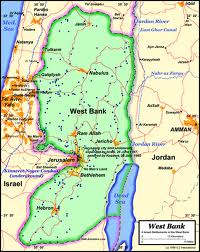 Many Israeli Jews and American Jews, and others as well, feel very strongly that this territory belongs to the Jews by Divine grant. This area is almost identical with that area known as “the mountains of Israel,” an area at the heart of the Land promised by God to the children of Israel. The area is commonly called “Judea and Samaria,” the inheritance of the tribes of Judah, Benjamin, Ephraim and Manasseh. To its credit, even a Palestinian website admits this (because the Bible cannot be dismissed). Here is what they say:

Zionists and their supporters have used history as a weapon and eyewash stating that Jews are indigenous people of Judea and Samaria, that this was the region given to them thousands of years ago by the “Divine”, only to entitle themselves to the land. They further claim that the name Palestine was given to the region after Arabs came here which has been proved wrong as this was always “the land of Philistines”.

Jews zealously assert that Palestine was given to them by the God and they did not snatch it, they have only come back to the land which was rightfully theirs. As far as the roots of these names concern, Samaria is the Biblical name for the area now known as northern West Bank, while Judea is the Biblical name for the Southern region whose capital is Palestine. In keeping with this, both Judea and Samaria refer to the territory which is now known as West Bank.

These ancient titles are purposely taken up by the Zionists to justify their claim on the West Bank on religious grounds. History reveals that these two territories were once a united kingdom under the rule of kings David and Solomon which later split into two separate kingdoms who were often at war with each other. Judea, which was also known as the Kingdom of Judah, was a monarchy which included the tribes of Judah and Benjamin alone over which the House of David enjoyed a continued primacy until the fall of Jerusalem. After its fall, the southern kingdom of Judea continued being ruled by the kings of Judah while northern Samaria went under the rule of the Israeli kings.

The name “West Bank” was given to the region after the war of independence in 1948 by Jordan when Arab armies took over these areas. This is the area which is spread on the west of the Jordan River and east of Jerusalem, covering a land space of about 5,900 square kilometers. Its most populated areas include Jericho, Bethlehem, Hebron and Nablus. (See http://www.palestinefacts.org/pf_early_palestine_judea_samaria.php).

The mountains of Israel are a very significant area to all who are familiar with the biblical text because so many locations central to the Bible’s story are found there. Here are some others of them, besides those mentioned on the Palestinian website:

Thinking geo-politically with the Bible in hand, we see that God is the true owner of the Land (Lev 25:23) and he gives it to whomever he chooses.  Biblical language repeatedly underscores this, such as in the Book of the Prophet Joel 3:2 – “I will gather all the nations and bring them down to the Valley of Jehoshaphat. And I will enter into judgment with them there, on behalf of my people and my heritage Israel, because they have scattered them among the nations and have divided up my land.”  We ought not to miss these terms of special intimacy: “my people an my heritage Israel . . . . my land.”  These realities are foundational to any fair dealing with the biblical text as invoked to address contemporary realities in the Middle East.

It is common in some circles to protest that the Jewish state falls short of the righteousness that God requires, and that therefore any Land promises cannot rightly be applied to them.  It is true that in 2 Chron 7:20 and elsewhere we see that God can remove his people from the Land when it suits him – “Then I will pluck you up from my land that I have given you, and this house that I have consecrated for my name, I will cast out of my sight, and I will make it a proverb and a byword among all peoples.” However this does not cancel Israel’s inheritance rights: it merely prevents them from enjoying that inheritance for a given time.

But of course God can and does restore the Jewish people to the Land when he deems it appropriate to do so.  Psalm 85 reflects on this dynamic –

Lord, you were favorable to your land; you restored the fortunes of Jacob.

You forgave the iniquity of your people; you covered all their sin. Selah

You withdrew all your wrath;

It is most instructive to read Ezekiel 35, where God pronounces harsh judgments upon nations around Israel who preseume that this land is up for grabs and that is no longer the patrimony of the Jewish people. In the next chapter,  God stresses that he will bring the Jewish people back to the area despite their spiritual failures, not because of their righteousness; “Therefore say to the house of Israel, Thus says the Lord God: It is not for your sake, O house of Israel, that I am about to act, but for the sake of my holy name, which you have profaned among the nations to which you came. . . . It is not for your sake that I will act, declares the Lord God; let that be known to you. Be ashamed and confounded for your ways, O house of Israel” (Ezek 36:22, 32).

Of course such passages conflict with current political realities, as the Palestinian website material at the top of this study illustrates. Here is a sampling of some other texts from the Ezekiel context concerning God, Israel, and this region.  Notice how for the prophet the mountains of Israel, Judea and Samaria, the West Bank are at the center of God’s final plans.

Ezekiel 35:12  I have heard all the revilings that you uttered against the mountains of Israel, saying, ‘They are laid desolate; they are given us to devour.

Ezekiel 36:4,6,8   – therefore, O mountains of Israel, hear the word of the Lord God: Thus says the Lord God to the mountains and the hills, the ravines and the valleys, the desolate wastes and the deserted cities, which have become a prey and derision to the rest of the nations all around . . .Therefore prophesy concerning the land of Israel, and say to the mountains and hills, to the ravines and valleys, Thus says the Lord God: Behold, I have spoken in my jealous wrath, because you have suffered the reproach of the nations. . . “But you, O mountains of Israel, shall shoot forth your branches and yield your fruit to my people Israel, for they will soon come home.

Ezekiel 37:22   – And I will make them one nation in the land, on the mountains of Israel. And one king shall be king over them all, and they shall be no longer two nations, and no longer divided into two kingdoms.

And Ezekiel 38:8, and 39:2, 4 speak of how he deals with final enemy forces, Gog and Magog, cryptic names mentioned toward the end of the book —  “After many days you will be mustered. In the latter years you will go against the land that is restored from war, the land whose people were gathered from many peoples upon the mountains of Israel, which had been a continual waste. Its people were brought out from the peoples and now dwell securely, all of them. . . . And I will turn you about and drive you forward, and bring you up from the uttermost parts of the north, and lead you against the mountains of Israel. . . . You shall fall on the mountains of Israel, you and all your hordes and the peoples who are with you. I will give you to birds of prey of every sort and to the beasts of the field to be devoured.”

Of course there are other issues that must be discussed in dealing with the current Middle East conflict. If it was all a matter of who has the best Bible verses, it might have been settled long ago!  But my intention here has been to clarify some of the textual reasons that many in Israel and beyond feel so impassioned about the region, that it must be in Jewish hands.

These texts won’t go away, and whoever deals with the disposition of these territories will have to answer to those people who take them very seriously.

1 Response to The West Bank: Why Some Are So Hot and Bothered