The Reversal of Causality: The Great Middle Eastern Flip Flop

Posted on October 7, 2012 by Stuart Dauermann

It is almost embarrassing to offer this post because the facts seem so obvious, at least to me. And yet, there are many out there too young to have gained a reliable historical perspective on the Middle East,  and others out there who have so drunk the Kool-Aid of propaganda that they cannot see what is so obvious, something that must be seen clearly if one would rightly assess the Middle Eastern situation.

And what is that obvious matter? Just this: since 1967, the Palestinians and the Arabs allied with them have succeeded in devictimizing Israel in the public eye, while increasingly presenting the Arab peoples as the true victims. This is not so much a matter of facts as of perspective: it is what we might call “The Great Middle Eastern Flip Flop.”

Explaining requires that we first consider a pattern of events from 1948 to 1967, as mapped by Benjamin Netanyahu in A Durable Peace: Israel and Its Place Among the Nations:

As a consequence of all of this, of the counterproductive futility of Arab acts of aggression against Israel, the Arab world realized they had to pursue their war on a different front. That front was to undermine Western, and especially United States, support of Israel. And the way to do this was to win a propaganda war wherein the Palestinians would be cast as victims, and Israel as fascist aggressors.

This propaganda war is conscious and easily demonstrable if we have eyes to see and ears to hear. Dr Michael Rydelnik tells me of once hearing Palestinian spokesperson, and protegé of Yassir Arafat, Hanan Aswari, being interviewed. During the interview, she 16 times referred to the Palestinians, but in each case substituted the word, “the victims.”  This word choice was no accident, and this analysis is no mirage!

This is what Netanyahu terms “the reversal of causality,” whereby it is Israel who is the cause of misery in the region, the foreign element that is unjustly occupying territories stolen from the Arabs, and through its fight to prevent its own extermination, is viewed to be the cause behind “the Palestinian problem.” What is forgotten is 65 years of unrelenting Arab aggression, and the fact that what has disrupted Arab life in the region more than anything else is the failure of Arab militarist initiatives, the refusal of Arab leaders to recognize Israel’s right to exist, and what have come to be known as “The Three No’s” – “no peace with Israel, no recognition of Israel, no negotiations with it.” And at the heart of the reversal of causality, which I term the Great Middle Eastern Flip-Flop, is the media-driven denial to Israel of the underdog status she once held, substituting instead the Palestinians as underdogs and suffering victims.

The best response I know of to all of this was penned by the non-Jewish populist philosopher Eric Hoffer,  who perceptively and authoritatively exposed the absurdity of this reversal of causality. His words are as true today, and will be as true tomorrow, as they were when penned in the Los Angeles Times in May, 1968, almost 45 years ago: 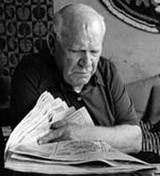 The Jews are a peculiar people: things permitted to other nations are forbidden to the Jews.

Other nations drive out thousands, even millions of people and there is no refugee problem. Russia did it, Poland and Czechoslovakia did it, Turkey threw out a million Greeks, and Algeria a million Frenchman. Indonesia threw out heaven knows how many Chinese — and no one says a word about refugees.

But in the case of Israel, the displaced Arabs have become eternal refugees. Everyone insists that Israel must take back every single Arab. Arnold Toynbee calls the displacement of the Arabs an atrocity greater than any committed by the Nazis.

Other nations when victorious on the battlefield dictate peace terms. But when Israel is victorious it must sue for peace. Everyone expects the Jews to be the only real Christians in this world.

Other nations when they are defeated survive and recover, but should Israel be defeated it would be destroyed. Had Nasser triumphed last June he would have wiped Israel off the map, and no one would have lifted a finger to save the Jews.

No commitment to the Jews by any government, including our own, is worth the paper it is written on. There is a cry of outrage all over the world when people die in Vietnam or when two Negroes are executed in Rhodesia. But when Hitler slaughtered Jews no one remonstrated with him.

The Swedes, who are ready to break off diplomatic relations with America because of what we do in Vietnam, did not let out a peep when Hitler was slaughtering Jews. They sent Hitler choice iron ore, and ball bearings, and serviced his troop trains to Norway.

The Jews are alone in the world. If Israel survives, it will be solely because of Jewish efforts. And Jewish resources.

Yet at this moment Israel is our only reliable and unconditional ally. We can rely more on Israel than Israel can rely on us. And one has only to imagine what would have happened last summer had the Arabs and their Russian backers won the war, to realize how vital the survival of Israel is to America and the West in general.

I have a premonition that will not leave me; as it goes with Israel so will it go with all of us. Should Israel perish the holocaust will be upon us.

3 Responses to The Reversal of Causality: The Great Middle Eastern Flip Flop