More Telling the Story: How Many Chapters?

If we are really serious about encouraging other people to embrace our faith commitments we are going to have to take an honest look at the approaches we habitually take to this task. Fifty years ago, and for many now as well, the standard term for such a process is telling or giving someone your “testimony.”  For many it is a somewhat stereotyped process, and because it is so culturally stereoptyped and habitual, it remains unexamined.  That needs to change.

It is good to reexamine things from time to time: it tends to let the air in and freshen things up a bit.  And if you don’t think the process of sharing Yeshua-faith with others needs airing out and refreshing in the Messianic Jewish context, then you are living on a different planet than I am!

The standard approach to “giving a word of testimony” is to describe one’s life prior to Yeshua faith, the circumstances that led one to consider believing in Him, the crisis point at which this all came together and one “accepted Yeshua as personal Savior,” or one “invited Yeshua into his/her heart,” and finally, the positive difference all this has made in one’s life. In four words then, the model is “before, process, crisis, since.”

In his book, Conversion in the New Testament: Paul and the Twelve, Richard Peace helpfully points out that the Christian world (and the Messianic Jewish world as well) have taken the spiritual experience of Saul of Tarsus as a template for normative Yeshua-faith spiritual experience. Paul does explain his Yeshua faith in the terms we have laid out, although one may argue that he says little about process but instead speaks of “before, crisis (the Damascus Road experience) and since.”  The cliché has it that Paul “saw the light.” And that model, consciously or unconsciously, has become in many circles the normative template for anyone else who seeks to “give a word of testimony.”

Dr. Peace invites us to consider how the New Testament (or as we might better term it, “The Apostolic Witness”) offers another model of coming to Yeshua faith, one that is far more gradual and process, rather than crisis, oriented.  He finds that model in Mark’s Besorah, the Gospel According to Markm which chronicles the process through which, over time, Yeshua’s disciples came to progressively understand the nature and implications of his uniqueness.

Insight – Through a chain of experiences, the disciples come to understand something new about Yeshua.

Turning – This results in a shift in their thinking and doing.

Transformation  – This shift in thinking and doing based on new insights results in personal transformation.

Mark’s Besorah seems to be organized around two great shifts in the disciples realizations about Yeshua, each of these shifts having three stages:

The first was a shift toward recognizing Yeshua’s unique relationship to the Messianic hope of Israel. This shift is traced in the first eight chapters of Mark, where, after a brief prologue, the disciples see Yeshua first as a rabbi/teacher, then as more than a teacher, a prophet, and then as more than simply prophet and teacher, but also Messiah.

The second shift concerns recognizing Yeshua’s unique relationship to the God of Israel. This shift is traced in the second eight chapters of Mark, where the disciples see just what kind of Messiah Yeshua is. First, Son of Man, then Son of David, and finally Son of God.

As one reads through Mark, one can see these stages happening and being marked out by the terms that are used, by the incidents recorded, and  by the disciples’ “Aha moments.”  But all of this happens in stages, and traces the gradual spiritual story of the apostles coming to Yeshua faith.  And by the way, one interesting aspect of the story is that the apostles are habitually slow to put two and two together. It was hard for them to change their own inner stories about who Yeshua was, and about what the Messiah was supposed to be like.  In Mark’s narrative, we see the apostles being led step by step, slowly, to changing their own inner narrative about who Yeshua was.

It would benefit those of you reading this blog who consider yourselves Yeshua-believers to consider what had been your inner narrative about Yeshua, and how you went through stages of recrafting that narrative, perhaps, like the apostles, through cycles of insight, turning (that is, change of perspective), and transformation—the seating of a new viewpoint in your inner being. 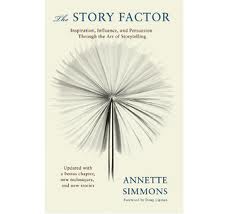 Annette Simmons, who writes in the commercial rather than spiritual sphere, has much to teach us here about how to help others move along in such a process. Read her words and integrate them with what I have just written about Mark, and about our own spiritual journeys. What implications do the following quotations have for how we “give a word of personal testimony,” or rather, give a series words of personal testimony, to help others see in our experience a possible template for their own.

Changing a diametrically opposed opinion demands that you move in baby steps. Story gives you the perfect format to gradually and indirectly move someone from one side of a conflict to the other side. Quoting research statistics, presenting philosophical arguments, and delivering elegant rhetoric aims too high. You need to aim lower—underneath rational thought—and take smaller steps. Your story must first connect you to to a place where you can agree and can feel the same things.

People change their opinions one step at a time. When you walk those you wish to convince through a story tour to “the other side” in small baby steps, you avoid the resistance they might otherwise feel to visiting “the other side.” Use details that make the characters in your story real people and more than likely your listener will begin to remember their own stories of real people that prove your point. You can help them see the view that you see as long as you take them on a tour that develops one step at a time, starting at a place where you can both begin, where you both agree.

Ultimately your goal is for your listener to reach the same conclusions that you have reached. You didn’t arrive at your opinion overnight and it is foolish to think they should. Rush it, and you may lose your chance to influence. Your story needs to take them on a tour of the aspects that step by step convinced you to believe what you believe so they can step by step come to believe the same things.

Our stereotyped way of sharing our Yeshua faith with people seems to me more sales than Spirit. We tend to feel that unless we have brought people to “accept Yeshua as personal savior” we have not done our job.  To that assumption I will say two things in closing.

A.W. Tozer was certainly a conservative Christian voice in his day, and something of a prophetic voice at that.  He decried the tendency to make absolutes out of time-bound culturally selected metaphors.    In the first chapter of his classic, “The Pursuit of God,” he speaks of modern evangelical naiveté in these words: “Everything is made to center upon the initial act  of `accepting’ Christ (a term, incidentally, which is not found in  the Bible) and we are not expected thereafter to crave any further revelation of God to our souls.”

Our job as those who invite others into the Yeshua-story is to be catalysts in their spiritual process.  Paul gets this, even if we don’t, when he writes, “neither he who plants nor he who waters is anything, but only God who gives the growth. He who plants and he who waters are one, and each will receive his wages according to his labor. 9 For we are God’s fellow workers” (1 Co 3:7-9). We should celebrate and not disparage every step our friends take toward reconstructing their personal narrative of who Yeshua is. We should avoid rushing them, and certainly we should avoid judging the value of our efforts and of their spiritual progress by some artificial, culturally determined “finish line.”

Let’s by all means tell our friends the Yeshua story. Let us tell them our own story and how God brought us to rewrite our inner narratives.  Let us help them reconsider and reconstruct their own narratives about what is right and proper and true.

But let’s not forget that this story God is writing in our lives has many chapters. And because He is the ultimate Writer,  every stage of the story is holy.