One of the most important stories to get a handle on is the story you tell yourself about the people whom you want to influence.  Discovering what that story is, and being honest with yourself about it, may take a long time and lots of work. Then comes the work of learning to tell a different story to yourself about them. But all the time and all the work are absolutely necessary.

Let me tell you a story to illustrate. 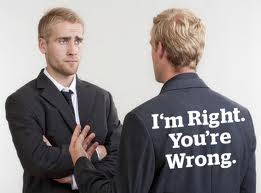 Jack and Jill (not their real names) are two people I met about fifteen years ago. Jill is a Jewish woman, tiny and frail, and her husband “Jack” is a gentile guy, bright, hulking, imposing.  When Jill came to believe in Yeshua, her parents became more orthodox, and moved to Israel where they help to bankroll some Orthodox Jewish initiatives.

The story Jack tells himself about his in-laws is that none of their religious observance has any value whatsoever.  In fact, he considers it an article of faith that their religion and religious practices are worthless, and that his loyalty to God requires of him to remind them that this is so. His faith-sharing is a zero-sum game in which one position is entirely the winning side, and the other, entirely the losing side.  Therefore, when he seeks to commend his Yeshua-faith to his in-laws, he feels divinely obliged to prove them entirely wrong for Yeshua to be proven entirely right.

How successful do you think this young man has been in his evangelistic forays with his in-laws, as he reminds these highly committed Jews that their religion is worthless? I already know your answer, and it is the same as mine. He has gotten nowhere.

Yet, to what degree have we been conditioned to share the besorah (the good news of Yeshua) in such manner that we must prove ourselves to be entirely  right, and the other person entirely wrong?

What Annette Simmons writes of the commercial sphere applies just as well to us in this religious sphere:

Your desire to influence is born of some belief that you know a better way. The firmer your conviction that you are “right,” the more susceptible you are to labeling those who disagree with you as wrong.  People don’t respond well to someone who believes they are “wrong.”. . . We tend to cast ourselves as the hero or heroine and paint those denying our requests [or resisting our message] as villainous. It is easier to imagine our adversaries as dumb, stubborn, or lazy than to consider they probably believe they have a “good reason” for not cooperating with us and may even think we are the dumb, stubborn, or selfish ones.

Influencing people you have labeled unwilling, unconcerned, [blind] or unmotivated won’t be easy until you find a new story [about the truth and about them] that acknowledges their point of view and good intentions. No matter who you want to influence–they are willing, concerned, and motivated about something their story tells them is important. . . . Only when you acknowledge the honorable aspects of the other side do you have a snowball’s chance of influencing them.

What kind of story do you and your crowd tell yourselves about the people whom you are trying to win to Yeshua-faith, and here I am speaking especially of our fellow Jews.  Is it a positive story that affirms their good intentions and values their life choices in many or any areas? Or are the default categories you have for them all “un-” categories, negations that hold them to be entirely in the dark until you, the enlightened Messenger, come with your light?  Have you ever seen people share their faith in a smug and condescending manner? How effective were they? Do you think you can effectively hide from people the emotional tone of your opinion of them when it is negative?

I know people who act on a Jack-like premise, who believe themselves obliged to entirely negate the Jewish people’s way of life as worthless, and who feel that insisting on this is so is intrinsic to their own  loyalty to the gospel.  Sorry Charlie, I can’t go there.

In an effort to lure Jack out of his fortress of certitude, I pointed him to the story of Cornelius the centurion, in Acts 10.  Cornelius was a Gentile, a godfearer, who reverenced the God of Israel but had not converted to Judaism. The risen Yeshua had not yet commissioned Peter to go to Cornelius’ house to tell the household about the good news. So it is that before he got there with the message, and therefore before Cornelius even knew about the gospel, something happened.  Here it is:

3 About the ninth hour of the day he saw clearly in a vision an angel of God come in and say to him, “Cornelius.” 4 And he stared at him in terror and said, “What is it, Lord?” And he said to him, “Your prayers and your alms have ascended as a memorial before God. 5 And now send men to Joppa and bring one Simon who is called Peter. 6 He is lodging with one Simon, a tanner, whose house is by the seaside.” 7 When the angel who spoke to him had departed, he called two of his servants and a devout soldier from among those who attended him, 8 and having related everything to them, he sent them to Joppa.

You will notice two things here. First, the angel speaks of Cornelius’s positive reputation before the throne of God, that his “prayers and alms [tefillah and tzedakkah]  have ascended as a memorial before God.” Second, even the soldier of his household, also likely a godfearer is characterized as “devout.”

However, when Jack read this familiar story out of the Bible at my request, he paused a beat and then said, “The angel could only have said that because Cornelius was on his way to becoming a Yeshua-believer.” In other words, Jack maintained his invincible insistence that apart from Yeshua-faith, no one has anything of religious value to commend them, all of their moral and spiritual practices are worthless (despite what the text says). In fact, people will invariably believe their story of the way things are, and interpret or discount evidence accordingly. That was true of Jack: it is also true of you and of me!  Unless people are willing to change their inner story, their inner narrative of the way things really are (a.k.a. their worldview), nothing new can penetrate.

Contrast this dismissive attitude toward other people’s religiosity with the behavior of St. Paul. Even when Paul comes to Athens where “his spirit was provoked within him as he saw that the city was full of idols,” we find him speaking to these rank idolaters in respectful terms, he refers to them as “very religious,” and mentions that when they had erected an altar “to the unknown god,” they got it right. He refers to them as “God’s offspring,” and quotes with approval from two pagan poets, one saying “In him we live and move and have our being,” and the other saying, “For we are indeed his offspring.”

The story Paul told himself even about idolaters whose idolatry was repugnant to him was not unrelievedly negative and dismissive.  And even the angel from God’s presence had something good to say about Cornelius, who was explicitly not yet a believer in the gospel.

How much more reason then do we who tell the good news to Jewish people have to detect, reject, and replace the negative stories we carry within us about the Jewish people, their religious life, and their heritage.

I could tell you horror stories about the horrific negative assessments of the Jewish people held  by people who claim to be bearers of good news to them.  You no doubt have some stories of your own. We should not be surprised that Jewish people have little or no use for such messengers and such messages.

Or does someone else have to be entirely wrong for you to be right? And is being right what it’s all about?

It is scary to redefine “them” as “us.” It deconstructs the familiar worldview where you are the good guy and they are the ones who “just don’t understand” or “aren’t willing to change” or “won’t listen.” When your new story [your narrative about life, your message, and “the other”] redefines a former adversary as within your community [or you within theirs!] you may discover you are the one who doesn’t understand, isn’t willing to change, or won’t listen. Which is more important to you–being right or influencing others?

All non-Bible quotes are from Annette Simmons, The Story Factor (Second Revision).