Of late I have been on a fascinating journey reading about and considering the impact of stories. 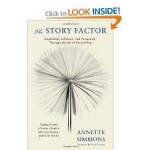 In her marvelous book, The Story Factor: Inspiration, Influence and Persuasion Through the Art of Story Telling” (Second Edition), Annette Simmons fleshes out this insight which I would guess arouses skepticism in many of you.

For example, she says this:

Stories are “more true” than facts because stories are multi-dimensional. Truth with a capital “T” has many layers. Truths like justice or integrity are too complex to be expressed in a law, a statistic, or a fact. Facts need the context of when, who, and where to become truths (33).

My epiphany occurred years ago when I read the story of Yeshua and Shimon (Simon) the Pharisee, found in Luke 7.  In that story, Yeshua is invited to the home of Simon for a meal.  The way the story is told reminds me of the truth-telling strategy of the entire Bible, which should become our truth-telling strategy when we speak of matters of faith to our friends. Here is how the account begins:

7:36 One of the Pharisees asked him to eat with him, and he went into the Pharisee’s house and took his place at the table. 37 And behold, a woman of the city, who was a sinner, when she learned that he was reclining at table in the Pharisee’s house, brought an alabaster flask of ointment, 38 and standing behind him at his feet, weeping, she began to wet his feet with her tears and wiped them with the hair of her head and kissed his feet and anointed them with the ointment. 39 Now when the Pharisee who had invited him saw this, he said to himself, “If this man were a prophet, he would have known who and what sort of woman this is who is touching him, for she is a sinner.” 40 And Jesus answering said to him, “Simon, I have something to say to you.” And he answered, “Say it, Teacher.”

If Yeshua were a twenty-first century westerner, an evangelical groomed in the religious culture of our day, a Messianic Jew such as many of us are, he would have “gotten to the point” and stated certain principles he wanted to highlight. He even might have used arguments and evidences to “convince” Simon. But he didn’t do that!  You can see from the verses that follow that instead he tells a story from which he wants Simon to draw his own conclusions (read the verses that follow in Luke 7 for what that story was).

But there is a double whammy here. Not only does Yeshua teach Simon through telling a story: the story of Yeshua telling the story to Simon is being used in the Bible to teach us! And so we have a teaching story within a teaching story.

By the way, Hasidism has learned this lesson well: enduring truths and values are always taught through telling stories. It is instructive to ponder why we have gotten away from this.

What’s the lesson here? When you share your faith with people do you give them arguments for why it is true, or do you tell stories that illustrate the truth alive in your life and and that of your community?  People will tend to interpret our “facts” through the grid of their own worldviews, the stories they tell themselves about what is real, what is true, what matters.  It is only when we give them another story to consider, another narrative, another worldview in personal three dimensions that we create the possibility of their ever being interested in our “facts.”

There is a “truth” evident in the right kind of stories that people do not need proven to them with factual arguments.  Such gut level confirmations are what Aristotle called “commonplaces.”  I am suggesting that it is only as and when we begin to talk about the God alive in our life and that of our community that we can hope to arouse the curiosity of our friends. And it only then that they might become interested in the stories in our Bibles, as and if they see or sense a continuity between our stories, the stories of the Bible, and then–payoff–the evolving story of their own life.

And I will have more to say about that next time.

I may even tell you a story or two 🙂