New Perspectives on Paul and Why They Matter – (3) James Dunn 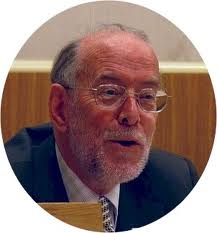 James D. G. (“Jimmy”) Dunn (born 1939) was for many years the Lightfoot Professor of Divinity in the Department of Theology at the University of Durham, and since his retirement, Emeritus Lightfoot Professor. Dunn has an M.A. and B.D. from the University of Glasgow and a PhD and D.D. from the University of Cambridge. For 2002, Dunn was the President of the Studiorum Novi Testamenti Societas, the leading international body for New Testament study. Only three other British scholars had been made President in the preceding 25 years. So clearly, he is a respected figure . . . and quite charming. I saw him speak at Fuller Seminary and found him to be good-natured, and well-loved by his colleagues, with a wit as quick as his mind.

Dunn is especially associated with the New Perspective on Paul. In fact, he is credited with coining this phrase during his 1982 Manson Memorial Lecture. He is a prolific author, and one can detect a maturation, self critique and bracing interaction with his critics in his later works. He continues to grow, and with him his readers.

Dunn has taken up E. P. Sanders’ project of redefining the church’s view of Palestinian Judaism in order to correct the stereotype of Judaism as a religion of works-righteousness. However, he doesn’t agree with all that Sanders teaches. One of the most important differences is that Dunn perceives a fundamental coherence and consistency to Paul’s thought, while Sanders spoke of an inconsistency.  He held that Paul founded a new religion that “no longer had anything to do with the Jewish covenant but with incorporation into Christ” (Yinger, 18). Although Sanders recognized the covenantal nomism of Second Temple Judaism, he didn’t deeply connect with how Paul validated this perspective in his own writings—that we get in by grace, but that we must keep on keeping on through obedience to reach the final goal.  Dunn critiques Sanders “for too quickly abandoning the exploration of Paul’s relation to his Jewish covenantal nomism in favor of a simple switch of religious patterns” (Yinger, 19).   Apparently, while Sanders  led the way in overcoming stereotypes about Second Temple Judaism, the leap to seeing Paul’s teachings in strong compatibility rather than in contrast with Judaism’s covenantal nomism was just too big for him to take.  Dunn helps us take it.

Dunn furthermore criticizes Sanders’ understanding of the term “justification”, arguing that Sanders’ understanding suffers from an “individualizing exegesis.”  Dunn argues that Paul brings in discussion justification in a context, that is, arguing against the proposition that Gentiles are categorically NOT the people of God unless they cease being Gentiles by becoming Jews.  To refute this, Paul states that one becomes part of the people of God by God’s gracious action to be received through faith, and NOT by becoming a Jew. The ‘works of the law’ phrase that Paul uses, as for example in Gal 2:16, in context refers not to attempts at earning salvation by self-effort as the Reformation tended to understand it, but to those behaviors which the Jews of Paul’s day viewed to be the boundary markers that distinguished the Jews, and not the Gentiles, as the privileged people of God, these works of the law being chiefly circumcision, dietary restrictions, and holy-days, especially shabbat. Documents from Qumran confirm that the term “works of the law” was used in precisely this way, as an evidential term for elite status, in Paul’s day.  Paul instead insists that the category “people of God” is broader than the category “Jew,” a revolutionary concept which was at the heart of his controversial status

Here’s a helpful quote from Dunn with which we close for today:

Judaism is first and foremost a religion of grace with human obedience always considered as a response to that grace. . . . Somewhat surprisingly, the picture which Sanders painted of what he called ‘covenantal nomism’ is remarkably like the classic Reformation theology of works—that good works are the consequence and outworking of divine grace, not the means by which that grace is first attained. . . . The Judaism of what Sanders christened as ‘covenantal nomism’ can now be seen to preach good Protestant doctrine (which Dunn approves, of course): that grace is always prior; that human effort is ever the response to divine initiative; that good works are the fruit and not the root of salvation (James D. G. Dunn and Alan M. Suggate, The Justice of God: A Fresh Look at the Old Doctrine of Justification by Faith [Grand Rapids: Eerdmans, 1994], 7-8).