New Perspectives on Paul and Why They Matter – (1) Krister Stendahl

Posted on February 28, 2012 by Stuart Dauermann

Perhaps you have heard about “The New Perspective on Paul.”  Actually, one of the prime figures in this field of study, James Dunn, suggests we should instead speak of “New Perspectives” plural, because there are a variety of new perspectives on Paul, and here we mean the Apostle, and not the Beatle.

This is a subject of greatest importance for those of us fighting against anti-semitism and anti-Judaism, and should also matter to anyone who wants to understand Paul as he was, and not as the church imagines him to be.  And that brings us to a lovely man named Krister Stendahl. 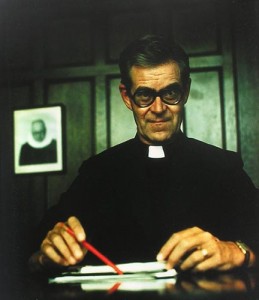 Stendahl about the age he was when he wrote our featured essay.

Wikipedia will tell you that Stendahl lived from 1921 to 1988, that he was a Swedish theologian and New Testament scholar, and also the Church of Sweden Bishop of Stockholm. He also served as professor,  professor emeritus, and Dean at Harvard Divinity School. In addition to all of these things, he was keenly interested in Jewish-Christian relations.  In this connection he served as the second director of the Center for Religious Pluralism at the Shalom Hartman Institute in Jerusalem, and besides teaching at Harvard, also taught at the very Jewish Brandeis University. A most interesting man, a friend of the Jews.

In September, 1961 he gave a lecture to the American PsychologicaL Association, subsequently published (1963) in the Harvard Theological Review, and republished many times since. It is “The Apostle Paul and the Introspective Conscience of the West,” You can read it here.  This is one of those essays for which you ask yourself, “Why didn’t anyone ever see this before?”  His brilliant thinking helped set off the whole world of “The New Perspectives on Paul.”

The key insight of this essay is that the West has habitually interpreted Paul and his letters through the lens of Martin Luther’s psyche, with a strong nod to St Augustine of Hippo.  That is, the church has assumed that Paul, like Augustine and Luther, had a troubled hyperactive conscience, that Paul was therefore tormented by guilt and inner conflict over not being able to meet the inflexible demands of Judaism. That is, until he was converted on the Damascus Road, delivered from bondage to Judaism, and discovered a new religion of grace and salvation by faith centered in Jesus of Nazareth.

Stendahl saw a variety of problems with this approach, chief among them being that Paul was NOT Augustine or Luther, and far from having an overactive and troubled conscience, Paul had a robust conscience.  Paul was able to say that as to righteousness under the Law, he was blameless. If this doesn’t sound like a troubled conscience to you, then you are right: Paul was NOT Augustine, nor was he Luther. Of the latter, Stendahl says this:

Luther’s inner struggles presuppose the developed system of Penance and Indulgence, and it is significant that his famous 95 theses take their point of departure from the problem of forgiveness of sins as seen within the framework of Penance: “When our Lord and Master Jesus Christ said: ‘Repent (penitentiam agite) . .. ,’ he wanted the whole life of the faithful to be a repentance (or: penance).”

After the Black Death in Medieval Europe, penetrating self-examination reached a hitherto unknown intensity. For those who took this practice seriously—and they were more numerous than many Protestants are accustomed to think—the pressure was great. It is as one of those—and for them—that Luther carries out his mission as a great pioneer. It is in response to their question, “How can I find a gracious God?” that Paul’s words about a justification in Christ by faith, and without the works of the Law, appears as the liberating and saving answer. . . .

In these matters Luther was a truly Augustinian monk, since Augustine may well have been one of the first to express the dilemma of the introspective conscience

Paul was not Augustine, and he was not Luther. Neither did he regard himself as being under bondage to Judaism, he didn’t change religions either and it is more appropriate to see his experience on the Road to Damascus as a call rather than a conversion.  (Some of you are reeling out there, I can tell!)

Stendahl helped us to begin seeing Paul and Judaism in a new way.  And to find out how that plays out, come back next time and we’ll learn a bit about E. P.  Sanders, another pioneer of the New Perspectives on Paul and how he further revolutionized our perspective on Judaism.