Toward Christians and Jews Partnering Together Under the Mission of God

Posted on February 22, 2012 by Stuart Dauermann 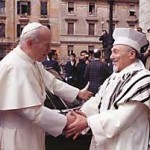 In this post, we look three of four question flowing from our recent examination of both the Protestant and Roman Catholic communities with regard to the Jewish people and the Jewish State.  These questions both assess from where we’ve come and suggest ways for Christians to move forward  respectfully, humbly and faithfully seeking to partner with the seed of Jacob under the mission of God, prepared not only to speak, but also to listen.

The First Question: What is the Hole in the Theological Bucket?

The first question is “What is the hole in the bucket that prevents many in the church from theologizing afresh about the role in the mission of God of the people and state of Israel?” The answer to this question is “supersessionism” also known as “replacement theology.”[1] As has been demonstrated in these pages, by postulating that the Jews have been set aside, with their covenant status expired or revoked, now replaced by the Church as the New Israel, one removes the entire engine driving theologizing about the Jews and the Jewish state. Not only is there no need to theologize about the Jews in such a case: there is no sense to it. Why theologize about something which is no longer a living theological reality?   Similarly, once one adheres to such a stance, the modern State of Israel becomes something of a secular anomaly, for if the State of Israel has theological significance, then the people of Israel have theological significance. And if that is so, then the entire edifice of supersessionsist assumptions upon which the Church bases its own identity begins to crumble. This being the case, there remains for supersessionist Christianity an enormous psychological bias against theologizing about the Jewish people and the Jewish state.  We have seen that bias repeatedly evident, especially in the WCC and LCWE.

The Second Question: What of Conservative Biblicist Christians?

Our second question is “What of conservative Christians who do theologize about the Jewish people and Jewish state?  Does their activity prove that supersessionism is not the pervasive problem we have named it to be? Is the problem not so much with how Christians think of the Jews, as with how Christians of a certain stripe think of the Jews?” No, this does not disprove my point at all. Almost all such Christians are embued with cryptosupersessionism, an unconscious and entrenched cluster of presuppositions held by those who oppose supersessionism, and whose rhetoric is nonsupersessionist, who nevertheless affirm the expiration or setting aside of those identity markers that formerly applied to the Jewish people.  This stance effectively nullifies Israel’s unique chosen status in whole or in part, rendering her chosenness merely rhetorical, not actual. What differentiates cryptosupersessionism from supersessionism itself is that its proponents vigorously reject supersessionism while failing to see how their presuppositions and theology rob their Israel-affirming words of susbstance, leaving religious Israel a hollow shell.

What are these presuppositions? Among them is the setting aside of the Torah of Moses, allegedly replaced by the Law of Christ which serves as a standard of righteousness for all Yeshua believers, Jewish and Gentile.  However, if the Law of Christ, seen as the commandments given by Yeshua and the apostles, replaces the Law of Moses, becoming the uniform standard of righteousness and rule of life for Jewish and Gentile Yeshua believers alike, how then are Jewish Yeshua believers actually, rather than simply rhetorically a distinct chosen people?   Such a stance empties Israel of her substance while greasing the skids for total assimilation into the Church. Such Jews do not live in Jewish covenant faithfulness, do not eat kosher, do not keep the sabbath, and likely, will freely intermarry.  Within a few generations at most their descendants will not claim Jewish identity at all, and certainly will not live as Jews.  Their Jewish identity has been superseded by something else.

This raises the question for Christians as to whether Jewish covenantal living ought to be maintained for Jewish Yeshua believers. What a significant question. Those who treat Jewish covenantal living as a quaint option rather than a mandated way of life are declaring that the Jewish way of life has been superseded by something else even as they might speak vigorously in favor of maintaining a Jewish distinctive. This is crypstosperessionism—the rhetoric of continuity surrounding its effective denial.  Sadly, those who adopt such a position, whether Jewish Yeshua believers or Christians barter away the birthright Jewish covenantal identity for a dish of foreign theological lentils.   This is Esau, not Jacob.

Adapting categories from Eugene Fisher’s analysis of John Paul’s work among the Jews, the following list outlines areas where Christians can and should make progress in their theologizing about the Jewish people and Jewish state.  Such a list helps us recognize that supersessionism is not one thing, easily defined. Rather it is a nexus of theological assumptions that marginalize the seed of Jacob, installing the Church alone as central.  These principles help bring Israel back into the center, which she is meant to share with the Church.[2]

Next time we will look at our fourth question, examining suggested safeguards to protect the integrity of the process.

[1] Kendall Soulen says the term is used of “the traditional Christian belief that since Christ’s coming the Church has taken the place of the Jewish people as God’s chosen community, and that God’s covenant with the Jews is now over and done. By extension, the term can be used to refer to any interpretation of Christian faith generally or the status of the Church in particular that claims or implies the abrogation or obsolescence of God’s covenant with the Jewish people. Supersessionism is thus substantially equivalent to replacement theology, and the two terms are often used interchangeably. R. Kendall Soulen, “Supersessionism,” in Edward Kessler and Neil Wenborn, eds., Dictionary of Jewish-Christian Relations, 413.

[2] The Jewish people must also make changes in their theology to the extent that it denigrates or marginalizes the Church. However, that is not discussed here as it is the theology of the Church which is the burden of this chapter.