Posted on February 16, 2012 by Stuart Dauermann 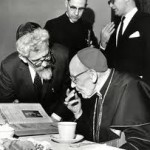 Following my treatment of the World Council of Churches and of the Lausanne Movement, this post is the second in a series on the Roman Catholic Church. Currently we are examining the papacy of John Paul II who strove to unpack and move forward the extraordinary advances made in the Vatican II encyclical, Nostra Aetate. These numbered points coincide with categories Eugene Fisher devised to examine the advances and contributions made by Pope John Paul II to Catholic-Jewish relations.  (And again, the photograph is of Rabbi Abraham Joshua Heschel advising Cardinal Beas, with whom he met for four years, advising on the advances to be made in Nostra Aetate).

2. The Jewish Patrimony as a Living Heritage. In addressing the Jews at Mainz, the Pope referred to Judaism as “a living heritage, which must be understood and preserved in its depths and richness by us Catholic Christians” (November 17, 1980).  He confirmed and deepened this thinking addressing delegates form Episcopal conferences gathered in Rome in March of 1982: “Christians have taken the right path, that of justice and brotherhood, in seeking to come together with their Semitic brethren, respectfully and perseveringly, in the common heritage, a heritage that all value so highly. . . . To assess it carefully in itself and with due awareness of the faith and religious life of the Jewish people as they are professed and practiced today, can greatly help us to understand better certain aspects of the life of the Church (March 6, 1982, italics added).[1]

Here he is not simply validating the Older Testament, or speaking of God’s ancient people, as is common in Protestant rhetoric. He is even going beyond representing Judaism as the Church’s older sibling. Rather, he is validating the Judaism of today as a heritage from which all might learn. The Pope sees an analogy between the spiritual patrimony of the Church developed down through the ages by the doctors and saints of the Church, and that of Judaism, through rabbinic literature and Talmud, Jewish philosophers and sages, each community developing what was given it by God.[2]

3. The Permanent Validity of God’s Covenant with the Jewish People. The Pope built on the insights of Vatican II, and in Lumen Gentium, commenting on Romans 11:28-29, said, “On account of their fathers, this people remains most dear to God, for God does not repent of the gifts He makes nor of the calls he issues.[3] He saw the Jews as fully chosen by God, in a manner that is “unequivocal and in no way diminishes the Church’s own affirmation of its own standing as ‘people of God.’”[4] In this regard, in his meeting with representatives of Episcopal conferences, he stressed the present tense of Rom, 9:4-5, stating that the Jewish people “have the adoption as sons, and the glory and the covenants and the legislation, and the worship and the promises,” while also affirming “the universal salvific significance of death and resurrection of Jesus of Nazareth.” He didn’t seek to reconcile the two realities by subsuming one under the other, but affirmed both together, stating “This means that the links between the Church and the Jewish people are founded on the design of the God of the Covenant.”[5] He further amplified this when addressing the ADL of B’nai Brith: “The respect we speak of is based on the mysterious spiritual link which brings us close together, in Abraham and, through Abraham, in God who chose Israel and brought forth the Church from Israel” (March 22, 1984).  Eugene Fisher adds, “Here there is not the slightest hint of supersessionism or of that subtler form of triumphalism that would envision Israel as having exhausted its salvivic role in ‘giving birth’ to Christianity.”[6]

Over and again the Pope startles us with his bold language and clear vision of a different theological relationship between the Church and the Jewish people. While the Protestant LCJE and the WCC decline to theologize about today’s Jews, or relegate such theologizing to statements about continuities between the Old Testament people of God and the Church of today, the Pope used the machete of metaphor to slash away centuries of theological undergrowth, forging new paths for thought and relationship, restoring to the Jewish people a living place in the  mission of God and a dignity among Christians denied them for millennia.

4. Catechetics and Liturgy. One could argue that John Paul II dedicated his entire papacy to unpacking Nostra Aetate and making it live in the life of the Church, Accordingly, he wanted catechisms and liturgy to reflect the new day that had dawned. Referencing the 1974 Guidelines and the later Notes on the Correct Presentation of the Jews and Judaism in Catholic Preaching and Teaching, he  spoke about catechesis in these terms: “I am sure that they will greatly help toward freeing our catechetical and religious teaching of a negative or inaccurate presentation of Jews and Judaism in the context of the Catholic faith. They will also help to promote respect, appreciation, and indeed love for one and the other, as they are both in the unfathomable design of God, who ‘does not reject his people [Ps. 94:14; Rom. 11:1].  By the same token, anti-Semitism in its ugly and sometimes violent manifestations should be completely eradicated.  Better still, a positive view of each of our religions, with due respect for the identity of each, will surely emerge, as is already the case in so many places.”[7] That words such as these came from the lips of a Polish Pope is preternatural to Jewish people when considered against the background of centuries of Polish antisemitism culminating in the Shoah, where more Jews died in Poland than anywhere else. This makes the next point all the more astounding as well.

[1] Both quotations in this paragraph from Fisher, “Commentary,” xxiv.

[2] This is explicitly stated in the 1985 Notes On The Correct Way To Present The Jews And Judaism In Preaching And Catechesis In The Roman Catholic Church.

[5] “To Delegates to the Meeting of Representatives of Episcopal Conferences and Other Experts in Catholic-Jewish Relations: Commisison for Religious Relations with Judaism (3/6/82)”, in Fisher and Klenicki, On Jews and Judaism, 38.

[7] “Address to the International Catholic-Jewish Liaison Committee on the Twentieth Anniversary of Nostra Aetate,” in Fisher and Klenicki, Spiritual Pilgrimage, 56

1 Response to The Roman Catholic Church, the Jewish People, and Zionism – Part Two