The Roman Catholic Church, the Jewish People, and Zionism

Posted on February 14, 2012 by Stuart Dauermann

Although as we have seen,  the World Council of Churches (WCC)  and the Lausanne Congress on World Evangelization (LCWE) have proven unable or disinclined to theologize about the Jewish people, this has not been so for the Roman Catholic Church, which has been at the forefront of rethinking and theologizing concerning the Church and the Jews.  In the main, this is due to three factors: the declaration Nostra Aetate from the Second Vatican Council;  Pope John Paul II’s labors to foster and implement changes inherent in that document; and the Catechism of the Catholic Church (1995), which in its relevant sections, seeks to embody these changes.

I am well aware of the historical sins of the Church against the Jewish people. But these sins are like black velvet which makes the diamonds of new developments stand out more brightly.  What I will be writing here will have little or no effect upon those for whom the Roman Catholic Church (RCC) must remain a stigmatized group and negative category. But for those who believe that God is the Great Change Agent, and that change is always possible, this will be an interesting excursion.  It will also be very interesting to note how extensively the RCC has theologized about the Jewish people, as compared with the unwillingness or incapacity to do so on the part of  the WCC and LCWE. 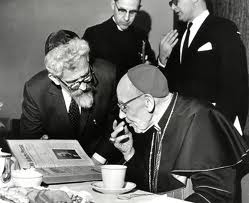 Section four of Nostra Aetate, the Declaration on  The Relation Of The Church To Non-Christian Religions  proclaimed by His Holiness Pope Paul VI  on October 28, 1965, reversed two millennia of what Jules Isaac named “the teaching of contempt.” Eugene Fisher is not exaggerating when he says of this document, “it is easily the most significant document concerning Jewish-Christian relations in Church history since Paul in Romans 9—11.”[1] Fisher highlights its rejection of anti-Judaic theological polemics, replacing these with foundations for a “renewed vision of the continuing role of the Jewish people in God’s plan of salvation for all humanity.”[2] Arguing on biblical grounds rather than from the writings of the Church Fathers, the statement explicitly exonerates the Jewish people of Jesus’ day and ours from wholesale responsibility for the death of Jesus, in one stroke disemboweling millennia of assumptions that the destruction of the Jerusalem Temple the diaspora of the Jews were divine punishments visited upon a nation of Christ-rejectors.[3] As later developed in the Holy See’s 1985 Notes on the Correct Way to Present Jews and Judaism in Catholic Preaching and Catechesis, the Diaspora is henceforth to be viewed positively, because it “allowed Israel to carry to the whole world a witness—often heroic—of its fidelity to the one God.”[4] Unambiguously, Nostra Aetate affirmed “the Jewish origins of Christian and that the Church draws (present tense) spiritual ‘sustenance’ from the people of God of the ‘Ancient Covenant.’ The Jews ‘still remain most dear to God’ and ‘have (present tense) the glory and the covenant and the law and the worship an the promise . . . for the gifts and the call of God are irrevocable.’”[5]

Giving a full accounting of progress made in Roman Catholic theologizing about the Jews since Vatican II is beyond the limits blogging sets for us. However, these are momentous changes and deserve comment, especially as they contrast so markedly with the inability and/or reluctance of the WCC and LCWE to theologize about the current status of the seed of Jacob and their homeland.

With today’s post, I begin here a brief summation and adaptation of a nine-point summary penned by Eugene Fisher concerning the outworking of Nostra Aetate in the papacy of John Paul II, who dedicated himself to making Nostra Aetate come alive in the life of the Church, to be supplemented in following posts.[6

1. The Spiritual Bond Between the Church and the Jewish People: The Special Relationship. John Paul II used the noun “brothers” and the adjective “fraternal” about the Jews. This is most significant because it reflects intra-Christian language, the same language he used in according to Orthodox and Protestant Christians a level of spiritual recognition formerly denied them.

He said the relationship between the Church and the Jewish people goes to the very essence of Christian faith itself, and that “to deny it is to deny something essential to the teaching of the Church.”[7] The spiritual bond with Jews, for John Paul, is to be properly understood as a “sacred one, stemming as it does from the mysterious will of God.”[8]

Repeatedly John Paul II used bold metaphors to break new ground in Catholic-Jewish relations. His language contrasts sharply with the more measured and cautious rhetoric of the WCC and LCWE.  At his allocution to the Jewish community at Mainz, West Germany (Nov 17, 1980), the Pope likened the relationship of Israel to the Church to the first and second parts of the Christian Bible.  He undermined supersessionist assumptions,  saying that this relationship “is a question . . . of reciprocal enlightenment and explanation, just as the relationship between the Scriptures themselves.”[9] Over and again he will use the language of partnership for a relationship formerly characterize by the language of hierarchy and replacement.

One cannot help but be startled by his bold characterization of dialogue between Catholic and Jews “a dialogue within our Church.”[10] Although many would differ, and some sharply, when the Pope suggests that the Jewish people are within the Church, that is not what he sought to emphasize.  Rather, he was emphasizing the fraternal bond between the Church and Israel, and that for him as for many after him, the Church and Israel are one community currently living in a state of schism. He sees the Jewish and Christian world as living in a state of unfortunate tension, destined to be resolved.

John Paul reinforces this foundational unity in his address at the synagogue in Rome.  Commenting on the words of Nostra Aetate, “The Church of Christ discovers her ‘bond’ with Judaism by ‘searching into her own mystery’” he said, “the Jewish religion is not ‘extrinsic’ to us, but in a certain way is ‘intrinisic’ to our own religion.  With Judaism, therefore, we have a relationship which we do not have with any other religion.  You are dearly beloved brothers and, in a certain way, it could be said that you are our elder brothers.”[11] Here his thoughts align with those of John Howard Yoder who terms Judaism ‘a non-non-Christian religion.”

[3] This dire portrait of Israel’s alleged punitive history is laid out authoritatively in St. Augustine of Hippo’s Reply to Faustus the Manichean, XII, 12 (fourth century).

[4] Holy See, Notes on the Correct Way to Present the Jews and Judaism in Preaching and Catechesis in the Roman Catholic Church, (Vatican, Holy See: Commission For Religious Relations With The Jews, 1985), VI:1. [cited February 6, 2012]. Online: http://www.vatican.va/roman_curia/pontifical_councils/chrstuni/relations-jews-docs/rc_pc_chrstuni_doc_19820306_jews-judaism_en.html

[9] John Paul II, “Address to the Jewish Community—West Germany (Nov 27. 1980),” Fisher and Klenicki, Jews and Judaism, 35.  His Holiness is here referencing directives for the application of the conciliar Declaration Nostra Aetate.