One More Word on the Ralph Messer Fiasco

Posted on February 6, 2012 by Stuart Dauermann

Ralph Messer is the self-designated “rabbi” who scandalized multitudes with his recent cavalier mishandling of the holiest of Jewish objects, the Torah scroll. If you don’t know anything about this, visit some of the recent postings on this blog and get filled in.

Today I visited his Facebook site and was dismayed to find that many uninformed and gullible people were commending him for what knowledgeable people and certainly all Jews regard as either tasteless or outrageous.

He had taken it upon himself to bless and exalt an Atlanta area pastor, Eddie Long, who has been in the newspapers recently, using the Torah as a prop in a way that Torahs are just not used. This inspired a firestorm of protest, including my own. 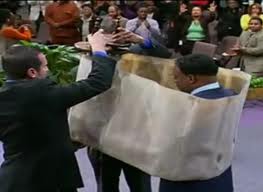 . . . and the second is of him doing the same with Pastor Evangelist Paula White.

So, here is the letter I wanted his supporters to see. I hoped they might persuade him to cease and desist from his ill-advised behavior. However, since he didn’t want the post there I am posting it here. I hope you find it worth the bother!  I hope the letter seems respectful–I didn’t want it to be nasty, but I did want to make a point.

Did I?  See for yourself!

When a person uses the term “rabbi” for himself, he is obliged to adhere to the standards that rabbis follow. You may be impressed with Ralph Messer’s personality, teachings, or charisma, but that in no way refutes that when he uses the term rabbi of himself, he must adhere to certain norms. The way he used/abused the Torah is one which rabbis of all stripes find repugnant. This should matter to him and to you.

He may be the nicest, and most Spirit filled man you know. That is besides the point. The problem is two-fold: First he claims the title Rabbi when he is not a Jew nor has any reputable body given him the title. Is is like me claiming to be the Pope. Second, in ministering under that title, he tramples underfoot the norms to which all rabbis adhere. This is not a small thing and should be acknowledged by him and by all people of a sincere, respectful, and aware faith.

The problem is one of a sense of entitlement. No matter how filled with the Spirit some person might suppose themselves to be, they are not thereby entitled to do as they choose with things deemed holy to others. If someone came into your house speaking in tongues and pulled your/your wife’s wedding gown out of the closet to clean their car, would you say “Hallelujah?” or would you rather say “What do you think you are doing?”

Thank you for reading.

Rabbi Stuart Dauermann
Jewish, and ordained under the Union of Messianic Jewish Congregations

9 Responses to One More Word on the Ralph Messer Fiasco