Posted on August 6, 2011 by Stuart Dauermann

Anyone with exposure to more than two or three Messianic Jewish congregations will know that the Messianic Jewish movement involves a wide variety of expressions and manifestations.   Regrettably, there are some which, at least for me, have no resemblance to Messianic Judaism rightly so-called.

In my last posting I outlined what I believe a Messianic Jewish service and community might look like when rightly so-called.  Let’s look today at what happens in our movement when this is bypassed or rejected in what I will here term a Messianic Substitution Service, one that substitutes something else for Messianic Judaism rightly so-called.

In a Messianic Substitution Service, there is no sense of Jewish covenantal responsibility, no sense of Jewish communal identity in the worship event, there is no sense of intergenerational unity with the Jewish people and their legacy, there is no or almost no sense of liturgical continuity with the Jewish people. As a substitute, such services, in their music, gesture, conduct and exhortations are highly individualistic, focusing on one’s personal relationship with and experience of God.  In such services, it is entirely secondary or even immaterial that the parties present are in whole or in part Jews.  Their Jewish covenantal and communal identity is eclipsed by another model of spirituality focused on the individual as a soul, who, O yes, now I remember, is Jewish.  Such services are not simply “another style” of Messianic Judaism. Instead, they involves a repudiation of Messianic Judaism rightly so called, a total excising of Jewish sancta, or a misappropriation of same, and the substitution of something else, even if wrapped in a tallit. 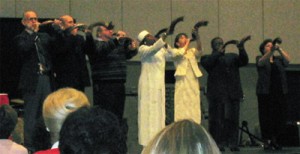 As another example of substitution, consider how at some such services, people blow shofars whenever they feel excited. Let’s get something straight here: this has nothing to do with Judaism as practiced in the real world. This involves a misappropriation  of Jewish sancta.

I would compare this to how occultists use crosses and Bibles. They use the same symbols as Christians do, but rob them of their intended context and communally attributed meanings, substituting others of their own.  Similarly, is it not illegitimate, a form of cultural plundering, to take an object as holy and circumscribed in use as the shofar is in Jewish life and use it however one “feels led?”  To me, it is like someone taking a cross off of a church altar and using it as a baseball bat.  Shofar mania is no less offensive a misappropriation of religious sancta, regardless of how entitled people feel they are to do so, even with proof texts in hand.

Sometimes a Messianic Substitution Service will seek to avoid anything “rabbinic,” its operatives priding themselves on incorporating only what they deem to be “purely scriptural.”  But such people fail to notice that no one sees the Scripture except through the lens of some community context.  People may see the Bible as Independent Baptists do, or as Calvary Chapel mellow Pentecostals do, or as Restorationist Revivalists do, or as the Jewish community does. Each community has ingrained and unconscious convictions as to what is primary, what is secondary, what should be emphasized, and what explained away. If you will but think on it for a moment, you will realize this to be true.

I rejoice when Messiah is preached,  even in Messianic Substitution Services.  But I do NOT rejoice at the abandonment of the formulation of a Messianic Judaism rightly so-called.