Judaism: The One and Only Non Non-Christian Religion 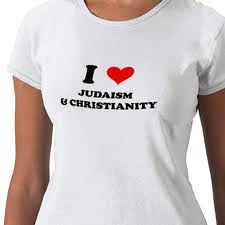 Many Christians and Messianic Jews act and think as if the seed of Jacob is a nation like any other, and Judaism a religion like any other religion, except for Christianity. This attitude is a legacy from supersessionism, infused like dye throughout the warp and woof of much Christian theologizing.  Of course, many such people, and certainly Messianic Jews holding this position, would protest that the Jews remain a unique and chosen people, referencing numerous texts highlighting the unique status of the Jewish people (See Deuteronomy 7:6, 14:2, 32:8; Psalm 33:12, 147:19-20; Isa 43:20, 65:22; Amos 3:2; Romans 3:1-2, for example)

No doubt many of you reading this see the Jewish people as still a unique and chosen people.

Yet, when it comes to our attitude toward Judaism, many of us make the  category mistake of thinking of Judaism as being a religion no different from other religions, and by extension, Jews who do not believe in Yeshua as being no different from other people when it comes to knowledge of God, spiritual experience, and covenantal standing. In feeling, thinking, speaking, and writing, many view Jews who do not believe in Yeshua as simply non-Christians, without hope and without God in the world, effectively pagans, even if religious ones. Such people have only two category slots: Christian and non-Christian.  However, when we lump Judaism together with other pagan/non-Christian religions in this way, we slot the Jewish people into a category Paul applied not to Israel, but to Gentile pagans.  It was the pagans not the Jews whom he termed “without hope and without God in the world.”  Indeed, he said the pagans were hopeless because they were aliens from the household of Israel.  You see, for Paul, God’s covenant people Israel was home base for the people of God.

Nevertheless, without thinking things through very much, some regard Judaism as nothing more than another fruitless religion, no different categorically from Hinduism, Animism, Voodoo or Buddhism. They consider Judaism to be a dead, false religion, devoid of the Spirit, and its practitioners, wasting their time on a religion that in no manner please God, a religion than cannot mediate to them any measure of true knowledge and experience with Him.

This negation of the Jewish religion is for many a subconscious and unquestioned axiom, and woe to the person who questions such a position or takes an opposing stance. He or she is sure to be regarded as deviant, dangerous, and at best, confused. One does not have to look hard or long to find explicit, bald and strident statements from within the Jewish missions and/or Messianic Jewish world denouncing Judaism as categorically no different from other non-Christian religions. Thus, one missionary to says this on his website, “Rabbinic Judaism is a false religion. The synagogues of today are deceptions, which lead Jewish people away from the way of salvation into a system that rejects Torah, substitutes Torah with human tradition, and leads them into destruction. Rabbinic Judaism is as much a false religion as any other false religion.”

But something is very wrong here. Judaism is not a religion just like non-Christian religions or like rank paganism, any more than Israel is simply a people like all the others. Just as the Jews remain the chosen people, Judaism remains the context of this people’s trans-generational communal devotion to the God and Father of our Lord Yeshua the Messiah, and their covenantal bond with him. Can this be said of any other people and their religion? Of course not! No, the Jewish people are in a different category from any other people, and to think of their religion as simply just another non-Christian religion is sloppy thinking.  And to think that way isn’t really biblical either.

John Howard Yoder helps us, correcting this category mistake  by referring to Judaism as “a non non-Christian religion”   (see John Howard Yoder, The Jewish-Christian Schism Revisited, ed. Michael G. Cartwright and Peter Ochs. Grand Rapids: Eerdmans, 2003:147-159). We are not speaking here of a two-covenant theory, or of the alleged impropriety or superfluity of gospel proclamation to this people. That is not my point nor is it my position.   Rather, my point is that we ought to think of the Jewish people instead as a non non-Christian people. When we do so, we correct the category mistake of simply thinking of Jews as non- Christians, functionally equivalent to rank pagans, and Judaism as a fruitless and fundamentally false religion, equivalent to any other world religion one might name.

Paul was closer to the truth, speaking to Herod Agrippa of the Jews and Judaism as his own people and religion.  Notice what he says about Judaism here:

My manner of life from my youth, spent from the beginning among my own nation and at Jerusalem, is known by all the Jews. They have known for a long time, if they are willing to testify, that according to the strictest party of our religion [not their religion] I have lived as a Pharisee. And now I stand here on trial for hope in the promise made by God to our fathers, to which our twelve tribes hope to attain, as they earnestly worship night and day. (Acts 26:4-7)

How many Jewish mission newsletters would publish articles categorizing religious Jews as “earnestly worshipping [God] night and day?” How many would refer to the Judaism practiced by other Jews as “our religion.” None, I would imagine. And this is because their categories have changed from those of Paul.

To paraphrase the Prophet Balaam whose prophecies form the substance of next shabbat’s Torah passage:

7 Responses to Judaism: The One and Only Non Non-Christian Religion