In this current series I am reflecting on a reader’s comment which begins with this statement:

Jewish believers are not a distinct chosen people in a spiritual sense. Christ has come and God destroyed the temple two millennia ago. There is nothing to be distinct about.

As I mentioned earlier, this excerpt and its wider context succinctly epitomize a certain brand of supersessionist thinking,  that school of thought which views the Church of Jesus Christ to have supplanted the descendants of Jacob as God’s beloved. This position, which views the Church as having superseded Israel in the affections and purposes of God, is termed supersessionism. Some refer to it by the alternative name, “replacement theology,” for obvious reasons.

I find the statement I quote above to be chilling because of the cavalier manner with which the author writes off the Jewish people. Reading between the lines, the reason Jewish believers in Yeshua are not a distinct people is because the Jews themselves are now nothing special.   The equation is indeed chilling:  “Christ has come”+”God destroyed the temple two millennia ago” = “There is nothing  (for Jews or Jewish believers in Yeshua) to be distinct about.”

To say the very least, as a Jew I am appalled.   But so should be every Christian. Read on.

Wesleyan Theologian R. Kendall Soulen reminds us that the term “God” is simply a monosyllable devoid of explicit meaning. The term must have a referent that gives it substance. For this reason, he reminds us that the good news of which the Bible speaks is this: “the God of ISRAEL has worked in Jesus Christ for the sake of all.” The God of whom the Church speaks, of whom Judaism speaks, who sent Yeshua to be the atoning sacrifice for our sins, whom we call the One True God, and whom Yeshua called “Father” is not simply God: He is explicitly and irreducibly, indeed everlastingly [but of course, not exhaustively] “the God of Israel.” Without Israel, God is reduced to a monosyllable devoid of content. Without his saving history with Israel we would know little about Him, and belief in “God” becomes little more than words. And when Israel becomes irrelevant or extinct, God himself becomes an avoidable has-been.

The Jewish tradition sees this clearly. commenting on Isaiah 43:12: “‘You are my witnesses,’ says Adonai, ‘and I am God’” (Isaiah 43:12). When you are my witnesses, I am God. And when you are not my witnesses, I am not God” (Midrash T’hillim 123:2). The existence of Israel and of God are intertwined. We Jews exist because be called us forth from the loins of Abraham and brought us up out of the Land of Egypt. And because we exist, his identity and name are secured in the world.

The people of Israel pursues its course in history in the faith that it is the people of God.  Because God loved Abraham, he chose him and his seed as the people of his Covenant.  Because this people is a human family with all the frailties and failings of humankind, the people of Israel has never ceased to prove unworthy of its election, rebelling against the mission laid upon it by God, more often than is seemly to say.   God, in his infinite mercy, nevertheless continues to love his people above all others.  To it, he has given his name so that he is known to all the families of the earth as the God of Israel.

. . .he has tied his saving and redemptive concern for the welfare of all humankind to his love for the people of Israel.  Only those who love the people of Israel can love the God of Israel.  Israel is thus God’s first-born, most precious in his eyes (Michael Wyschogrod, “Israel, the Church and Election” in R. Kendall Soulen, ed., Abraham’s Promise: Judaism and Jewish Christian Relations, Grand Rapids: Eerdmans, 2004:180).

St Paul agrees when he says in Romans eleven that it is only when Israel herself enters into her preordained fullness that all mankind will attain to the resurrection of the dead and the consummation of all things. There is no final blessing for anyone else apart from God’s final blessing for Israel.

My interlocutor would do well to pray every day with all that is in him that his own words prove false, for as goes the people of Israel, so goes the Name of God and so goes the destiny of the nations. 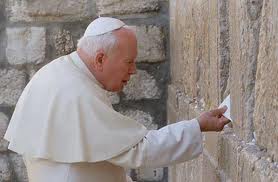 In March, 2000, Pope John Paul II visited the Western Wall, and in an indelible gesture, slipped a note into its stones, a prayer to the God of Israel.  This is what the note said:

God of our fathers,
You chose Abraham and his descendants
to bring your Name to the Nations:
we are deeply saddened
by the behaviour of those
who in the course of history
have caused these children of yours to suffer,
and asking your forgiveness
we wish to commit ourselves
to genuine brotherhood
with the people of the Covenant.