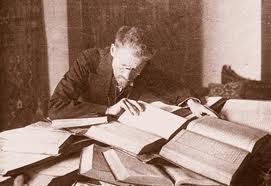 Eliezar Ben-Yehuda (1858-1922) was the man who singlehandedly resurrected the Hebrew language for modern use, beginning in the last quarter of the 19th century.  Using legitimate grammatical processes extrapolated from ancient Hebrew texts, he developed the many thousands of new words necessary for modern life.  He reasoned that it was only a matter of time before the Jews had their own state, and he wanted to make sure they had their own language waiting for them when that occurred!  Among his other accomplishments from working sometimes eighteen hours a day was his remarkable seventeen-volume, “A Complete Dictionary of Ancient and Modern Hebrew.” It was completed by his second wife, Hemda, and his son after his death.

But as the Talmud says, “all beginnings are hard,” and so was his.  Michael Brenner reports,

Since Eliezar Ben-Yehudah did not have the most important basic terms of the modern language at his disposal in the late 19th century (when he began his project), the Hebrew spoken in his home was woefully inadequate.  If, for example, he asked his wife, who understood very little Hebrew anyway, for a cup of coffee, his own vocabulary lacked the words for cup, saucer, spoon and pour.  His son Itamar Ben-Avi later recalled Ben-Yehuda gesticulating while saying, “Take that and do that and bring that and I’ll drink.” (Michael Brenner, Zionism: A Brief History, Trans. by Shelley L. Frisch, Princeton, NJ: Markus Wiener Publishers, 2004) 80.

Let that be an encouragement to any of us struggling to learn a language!