What Do You Say to a False Prophet? – Harold Camping

I wrote a letter to 89 year old Harold Camping, President of Family Radio, who stampeded thousands, perhaps millions into being absolutely  certain the Rapture would take place May 21, 2011.   If he reads it at all, it will likely not be before Monday, the 23rd.

He is but one of the more egregious examples of what can happen when people are contemptuous of the voice of community and tradition in interpreting Scripture.  Such people sometimes end up going to extremes, and are usually the last to know.

I sent this letter by email on Friday afternoon, May 20, 2011.  I hope he gets thousands like it. 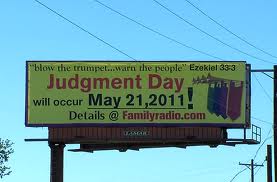 I began listening to you on WFME when I first came to faith in Christ in the early 1960’s. I also knew the engineer at your station in San Francisco at KEAR when I lived there in the 1980’s. I am familiar with your patient style and your voice of authority on Open Forum.

By the time you read this, you will know that you have led many thousands astray and undermined their faith in the clarity of Scripture because they trusted you and your absolutist word about what the Bible says. This is most serious: there are people who will abandon the faith now because they trusted in you, took extreme actions on the basis of your interpretation, and are now confused and disillusioned about the authority and truth of the Bible, which you have so grievously misrepresented.

In addition, “the name of God is blasphemed among the Gentiles because of you.” Millions will now laugh at biblical faith because they KNEW what you did not know even before May 21: that you were self-deceived.

The Bible says that in the last days there will be many deceivers, deceiving and being deceived, who shall deceive many.

I know you don’t want to be one of them.

Brother Camping, it is time for you to repent, and here is what you must do, in my opinion.

You must submit to some ecclesial authorities, preferably from the Christian Reformed Church from which you schismatically departed, or a community of like weight which is not indebted to you as is your Board, and, confessing that you lack the capacity to rightly discern the truth, ask them to teach you again the elementary things of the Word of God. Mr Camping, you know the Bible well: but you are deeply deceived as to how it is to be rightly divided and interpreted. And you are deeply deceived and deceiving about the Church and about ecclesial structures. All of that has become crystal clear with the dawning of the sun on May 22.

Many thousands have been damaged by your proud, even if sincere, folly.

Please repent as publicly as you have deceived the masses. It is the least you can do.

For your soul’s sake, for the sake of many thousands of others, and for the name of God, please.

5 Responses to What Do You Say to a False Prophet? – Harold Camping