Arnold Schwarzenegger, Moral Failure, and The Rest of Us

This morning’s L.A. Times brings sad news under the picture of a clearly distraught world leader: 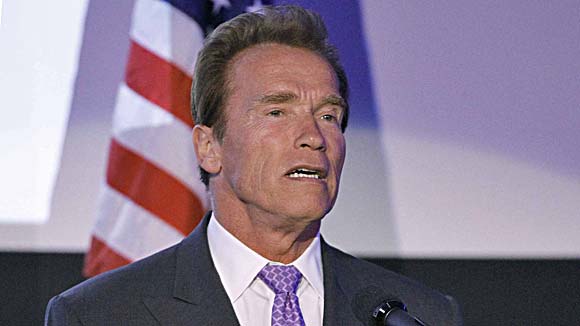 In acknowledging he fathered a child more than a decade ago with a member of his household staff, former Gov. Arnold Schwarzenegger said he deserves “the feelings of anger and disappointment among my friends and family.”

Schwarzenegger released a statement Monday in response to inquiries by The Times over the child. The news came a week after he and Maria Shriver separated.

“After leaving the governor’s office I told my wife about this event, which occurred over a decade ago,” Schwarzenegger said Monday night in a statement issued to The Times in response to questions. “… There are no excuses and I take full responsibility for the hurt I have caused. I have apologized to Maria, my children and my family. I am truly sorry.” http://latimesblogs.latimes.com/lanow/2011/05/schwarzenegger-i-deserve-feelings-of-anger-and-disappointment-over-out-of-wedlock-child-.html

This is very sad for all concerned, and I for one am convinced that Schwarzenegger and his lovely wife are fundamentally decent people.  Maria had two of the most remarkable parents to have graced public life since the founding of the Republic, and has long demonstrated her pedigree in her own conduct.  And although Arnold’s lineage is less impressive, that a woman of Maria’s caliber would marry him is alone a recommendation. He is a someone who from humble beginnings became a world class weight lifter and movie star, married into a blue blood family, and was elected governor of California. This is impressive.

In view of recent disclosures, it would be too easy to just write off Arnold Schwarzenegger as really cad, a jerk, worse than the rest of us, or even as simply a typical powerful man. The truth we need to learn lies far deeper than that.

The Book of Proverbs speaks to this situation and to each of us in words of stunning moral clarity such as are not generally welcomed in our “Just Gimme More” society. Here are those words:

Two things I ask of you; deny them not to me before I die:

Remove far from me falsehood and lying;

Give me neither poverty nor riches;

Feed me with the food that is needful for me,

The most important thing for the proverb’s author is that he not abandon his loyalty to God nor disgrace him.  And with this as the bottom line, he asks that God protect him from falsehood and lying, and from poverty on the one hand, riches on the other because, especially in a climate where falsehood is indulged, too much poverty or too much riches leads to moral failure.  And again, that must be avoided because it disgraces God and damages our bond with him.

Arnold is a rich and powerful man.  But too often, with too much power and too much riches, comes trouble, sadness, and disgrace.  Evidence that this is so may be found on the front page week after week.

In these days when glib wordsmiths like Christopher Hitchens and Richard Dawkins ridicule the very idea of faith in God, one is forced to ask: Are we better off for being freed from accountability to God, from sensitivity to preserving his honor?  And is “Just Gimme More” sufficient as our highest value?